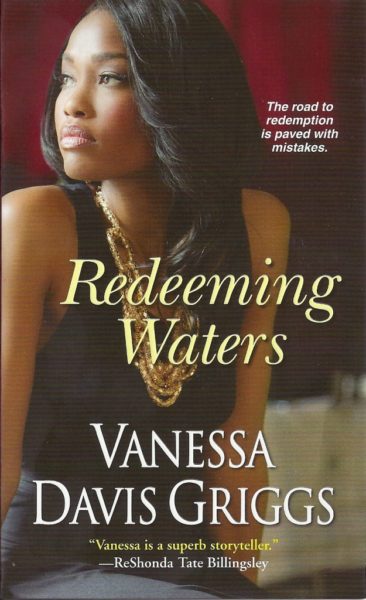 Author Vanessa Davis Griggs is on a mission to tell others about God.

“I am a Christian who absolutely loves the Lord with all my heart, mind and soul. This is who I am. I write what is in me (what’s inside will definitely come out!),” said Griggs. “For me, it’s about encouraging folks to hold on and know that there is a God who is there through it all. It’s about being obedient to what God has placed in my hands to do.”

That obedience has led to a long publishing career, including the upcoming re-release of her novel Redeeming Waters with a new cover in mass market paperback.

“Redeeming Waters is a story about a mega gospel recording artist named King Avid who meets Brianna,” she said. “Their paths cross again years later and you see them both dealing with some things during that time. As with all of us, we make decisions not realizing how deep the consequences of those actions may take us. This story shows how one decision can begin to snowball into something that’s hard to stop as it gains an avalanche of momentum. People will also learn things when it comes to the biblical telling of David and Bathsheba.

“My first published book was in 1999 and it was entitled Destiny Unlimited. I’d sent manuscripts off to mainstream publishers for consideration, but it wasn’t so easy for African American authors back then. The industry didn’t always care to support positive stories and acted like it was unrealistic to show that all black men weren’t selling and doing drugs or in prison…that there are wonderful black men taking care of their families. I knew there were other sides to the stories they published. I met a man named Maurice at a Birmingham Southern College’s Writing Conference who had published his own book. He told me I needed to get my work out there myself. So I did, starting a company I called Free to Soar. I wanted my work out there because I believe if you want to bless someone with what God has given you, you have to make it happen somehow. With my third self-published book, Promises Beyond Jordan, I was approached by the senior editor at BET Books/New Spirit who wanted to acquire the rights to publish it. I received a two-book deal with them, followed by 12 books published by Kensington/Dafina.”

With all her books, her message remains the same.

“No matter what you are going through, God is there. As people, we may have difficult times in life, but we can do all things through Christ who strengthens us (all includes the good and the bad). I also hope readers see that you can be entertained at the same time you receive an enlightening Word from God that encourages you along the way.”

To learn more about Vanessa Davis Griggs, visit her at www.VanessaDavisGriggs.com.

(via Hope for Women)