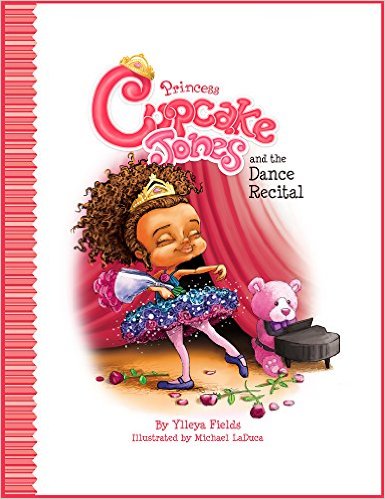 Reading with your little one has never been so sweet, thanks to the latest installment of the Princess Cupcake Jones series by Ylleya Fields.

“Princess Cupcake Jones and the Dance Recital is all about Cupcake’s love for dance, specifically ballet. However, when the recital comes around, she becomes afraid that she won’t be able to do a move just right,” Fields said. “It follows her as she learns important lessons about practice making perfect and doing your best.”

Fields used personal experiences for the book, which is the fourth in the Princess Cupcake Jones series.

“My daughters love to dance and the older two would come home with stories from their own ballet class, which I incorporated into this story,” said Fields who has three daughters and a son. “It just seemed right that Cupcake Jones would be in dance class too!”

Princess Cupcake Jones has garnered a legion of fans young and old, including celebrities like Christina Milian and her daughter, Violet. In addition, there is also merchandise available that ranges from plush dolls to tshirts.

The stories, which are illustrated by Michael DeLuca, incorporate values.

“Each story has its own moral or family value,” Fields said. “[Princess Cupcake Jones and the Dance Recital] covers practicing in order to get a skill just right. As well as doing the best that you can after you’ve practiced.”

The stories are also offer other important lessons for young readers—and their parents.

“Princess Cupcake Jones is a way to diversify your children’s reading material. In this crazy world we live in, it’s important that we teach our children from a young age that people are alike no matter if they look a little different from each other.”

To learn more about Princess Cupcake Jones and the Dance Recital and the other books in the series, visit www.princesscupcakesjones.com.

(via Hope for Women magazine)

Previous Post: « Get Seduced by Author Monica Richardson
Next Post: Tia McCollors Gathers Friends for New Anthology, When She Loves »