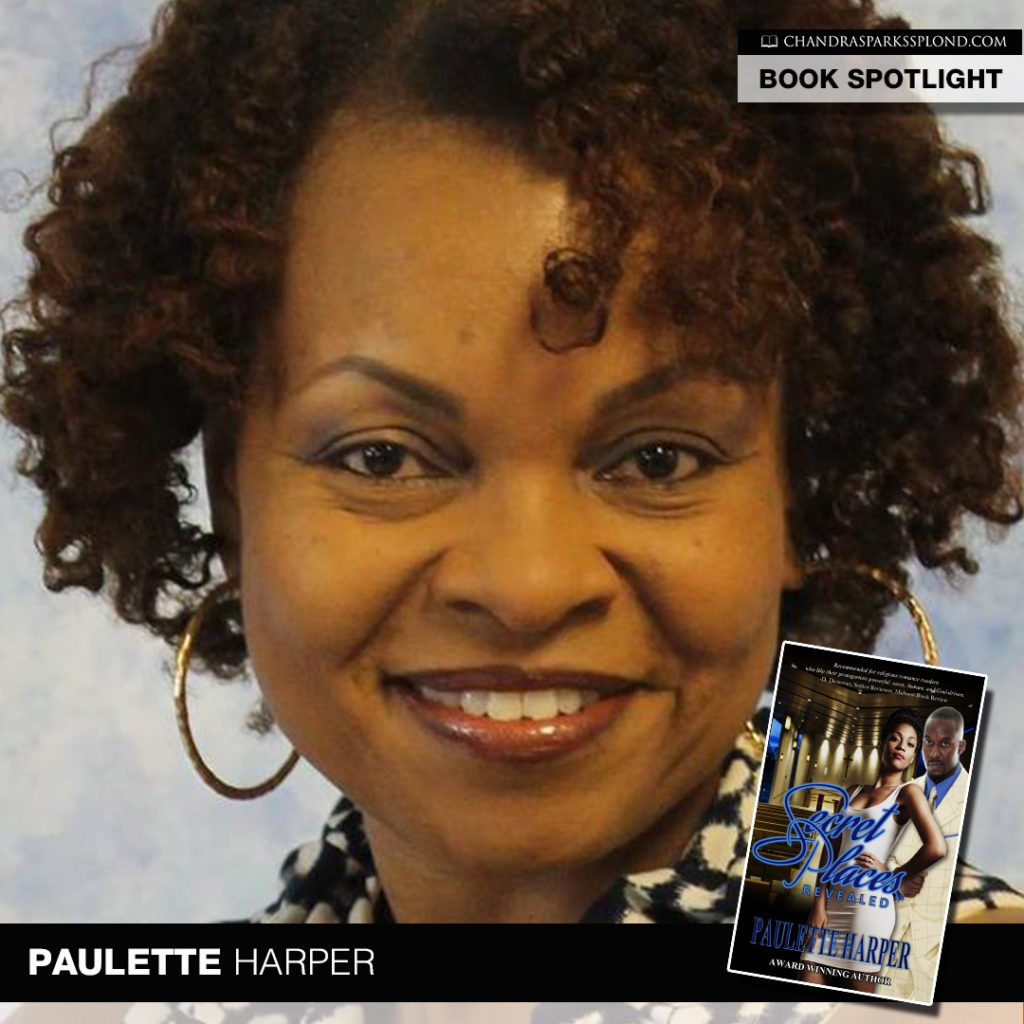 I’m honored to have author Paulette Harper on the blog today to share information about her book, Secret Places Revealed, which has 50 five-star reviews on Amazon. Welcome, Paulette.

About the Book
He wasn’t looking for love.

She was running from the pain.

One encounter changed everything.

Single—and very content—real estate developer Aaron Blackman is determined not to become involved in another relationship. He’s experienced enough drama to last a lifetime. The only thing garnering his attention now is his growing business. And he plans to keep it that way. Then Simone Herron waltzes into his life, beautiful and confident. Fighting to keep his promise to himself—to remain single—he soon discovers that when it comes to love, some promises must be broken.

After losing her fiancé in an untimely death, Simone Herron relocates. She desperately needs to put the past behind her and start a new chapter in her life. While love is the farthest thing from her mind, she experiences an attraction to the handsome Aaron Blackman that frightens her. She’s built a wall around her heart, but can she find the strength and courage she needs to welcome love again? To do so, she must conquer her fears and allow God to put all of her broken pieces back together.

About the Author
In addition to being an award-winning author of Completely Whole, Paulette Harper is an inspirational speaker, as well as a writing workshop instructor. She has a passion to coach aspiring authors and speaks into the lives of women from every walk of life. Her literary works have been spotlighted in a growing number of publications, including CBN, Real Life Real Faith Magazine, Black Pearls Magazine and The Sacramento Observer. She has also appeared on numerous local and online radio shows.

“Aaron, good morning. This is Holly.”

“Good morning. What’s up?” He couldn’t imagine why Holly was calling, knowing he was on his way into work. He didn’t have anything pressing on his calendar or any clients coming into the office until later that afternoon.

She muttered, “Aaron, Mr. Kane is here to see you. He keeps coming to my desk, asking when you will be arriving. If he keeps pacing back and forth on that carpet in the sitting area like he’s doing right now, we might have to bill him for new carpet.”

Aaron let out a deep sigh. What is it now? “Okay. Tell Mr. Kane I’ll be there within the next fifteen minutes.” He paused. “Holly, pull the file.”

With a heavy sigh, he ended the call. He drove the rest of the way to work praying, Lord, my morning cannot start like this. He had an unnerving feeling about the meeting, but he didn’t know why.

Fifteen minutes later, he pulled into the parking lot. He grabbed his briefcase from the passenger’s seat and took the elevator up to his office. When the elevator doors opened, instead of seeing Simone’s beautiful face or being greeted by Holly, he was met by Mr. Kane, who had fire in his eyes.

Aaron instructed Holly to hold all his calls. From the look in Mr. Kane’s eyes, Aaron could tell he hadn’t come to pat him on the back. The back of Aaron’s hair stood up as Mr. Kane trailed him into his office. Why does it feel like I’m about to get a beat-down?

“Come on in and have a seat.” Aaron sat in his chair and observed Mr. Kane pacing back and forth.

“No, thank you. I’ll stand.” The man blew out a terse breath. “Blackman, I trusted you with this project. And this is how you repay me?” His voice was shrill, harsh.

Aaron was about to respond, but Mr. Kane held up a hand, silencing him. Aaron’s eyes widened, but he remained calm.

“Were you trying to rip me off, or what?” He peered at Aaron and cleared his throat for the tenth time.

Aaron’s jaw tightened. He was getting furious. There was a long moment of silence between them. Aaron quickly rose to his feet. He stood at least two inches over the man. With one punch, he could send the man into his next dream. Aaron gave him an exasperated look instead. “Mr. Kane, what do you mean, ‘trying to rip you off’? Blackman and Blackman is a reputable organization, and I take offense. I would strongly recommend you explain your statement.”

Mr. Kane tossed the financial reports on Aaron’s desk. “Gladly. Those are the financials we received in my office. My accountant looked them over and informed me that the bottom line is over the original budget by four million dollars.”

Aaron frowned. “That can’t be correct. I looked over the reports myself and verified the amounts before they were sent to you. There must be some logical explanation.” Aaron grunted. He felt like a scratched record. The last time Mr. Kane was in the office, Aaron had given him the same response. His heart rate increased as he glanced over the report. “I need time to look this over and see where the mistake is.”

“Don’t bother, Blackman. Time is money, and mistakes like this are costing me.” He paused to take a breath. “I’ve decided to take my project to LW Partners instead. I hear Lamont is one of the best in the Bay Area, also.”

Aaron’s face tightened. “Mr. Kane, give me until later today to see what happened. I’m sure the mistake will be corrected.”

Aaron’s anger rose several notches. His level of tolerance diminished. “Mr. Kane, do I need to remind you that we have a signed contract?”

“No, you don’t need to remind me at all. Sue me then, Blackman.” He turned and walked out of the office, slamming the door behind him.

Aaron collapsed in his chair. What happened? He was in disbelief. Did he say he was giving the project to Lamont Willis? He leaned back in his chair and loosened his tie. One of the biggest projects of my career slipped out of my hands … because of a mistake.

All the time and long hours wasted, not to mention the money the firm was planning on making. He sighed heavily as he stared, bewildered. He sat in confusion, replaying the last few minutes in his head. The more he thought about it, the more annoyed he got. Why does Lamont Willis’s name keep popping up?

Lamont was his archenemy—professionally and personally. Out of all the real estate developers in the Bay Area, Mr. Kane had selected him. Why? Aaron pounded his fist on the table. The man was a scumbag and a cheat. How did he manage to steal this project away from me?

Aaron thought about the last time he’d seen Lamont. How could I forget? He came to pick up Simone for lunch. He remembered the smirk on Lamont’s face. A twinge of irritation crawled over Aaron’s skin.

Aaron and Simone had looked over the financials together. They were all in order. Everything was correct. So, what happened between Simone leaving his office and Mr. Kane receiving the package? Something wasn’t right. It didn’t add up. Could she have bungled the reports? But why? No. Aaron. She’s too meticulous. She would have never made that kind of mistake.

His mind traveled to the times all three of their paths had crossed. Lunch at Le Cheval. Maybe that would explain her nervousness that day. The conference in Las Vegas. He’d seen them talking. Lamont came to the office to pick her up for lunch. The roses—she’d never divulged their sender. I’d bet good money they were from Lamont.

It was obvious Lamont was attracted to her, but she’d led Aaron to believe she wasn’t interested in Lamont.

Knowing Lamont, he’d use anybody to vex Aaron, including Simone. Aaron, you’ve lost your mind.

Hmm, have I? Could they be working together? If they were, she was really good at fooling him. He felt a tightening in the pit of his stomach. His skin crawled.

His eyes flew to their picture on his phone. The selfies they had taken at Yoshi’s. His feelings were all over the place. One moment, he dismissed the thoughts of her and Lamont conspiring together. The next, he pondered the possibility.

He was emotional, but he had to know the truth.

Aaron marched into Simone’s office and threw open the door. She jumped in her seat as he slammed it shut. She spun in his direction, and he stared her down with dark, piercing eyes. “We need to talk.”

Use my affiliate link to purchase your copy of Secret Places Revealed.