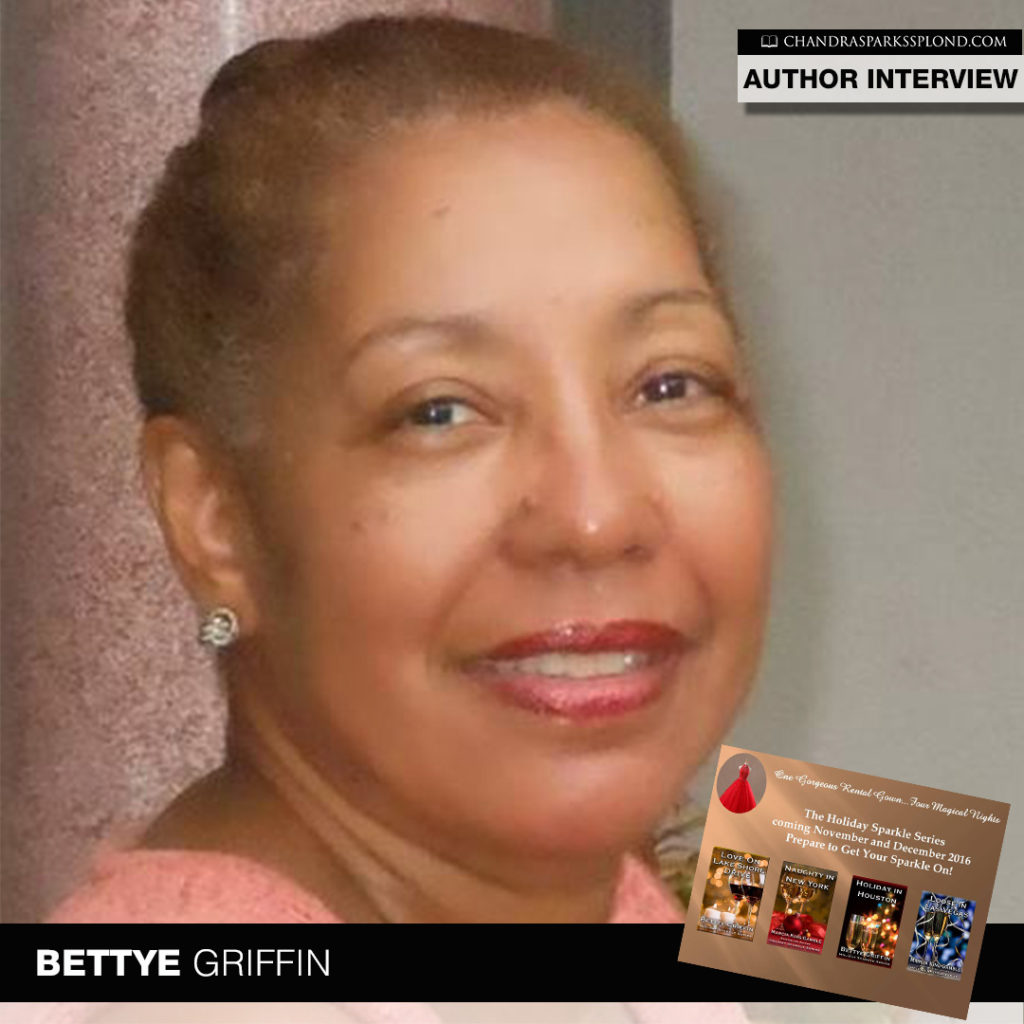 Almost 20 years ago, Bettye Griffin decided to take a chance on love, and if the more than 30 romance and women’s fiction titles she has published are any indication, it seems the gamble has paid off. I recently spoke to the author and publisher about her latest book.

Tell me about your latest book.
My latest project is the Holiday Sparkle series brainstormed by Marcia King-Gamble (Marcia was the very first published author who reached out to me when my first book came out 18 years ago, and we’ve been friends ever since) and myself. It is a four-novella series revolving around women in different parts of the country who, through the magic of the Internet, rent the same formal red dress to wear to functions over the holiday season: a wedding held over Thanksgiving weekend, a business holiday party for executives, a charity ball, and New Year’s Eve. My Love on Lake Shore Drive launched the series, followed by Marcia’s Naughty in New York, my Holiday in Houston, and Marcia concluded the series with Loose in Las Vegas. We released the books in real time, i.e., close to the times they actually occur, when people were more likely to be in the spirit, rather than forcing Christmas down their throats in September and October like the department stores and traditional publishers do. But in time for Valentine’s Day we released all four novellas in a single volume, with an added epilogue written just for the bundle. (Readers who bought and read the books separately can read the epilogue at my website.) The bundle is available at both Amazon and Barnes & Noble. Two of the stories are interracial, and two are African-American…so follow the red dress as it is shipped to Chicago (Love on Lake Shore Drive), New York (Naughty in New York), Houston (Holiday in Houston), and Las Vegas (Loose in Las Vegas), bringing the magic and marvel of romance to its wearers.

Why did you decide to write it?
Marcia and I have been talking about collaborating for years. Last summer we put our heads together and tried to come up with a connecting theme other than brothers and sisters. I’d seen one of my nieces posting photos of herself and her husband at different events, always wearing gorgeous dresses. I’d asked where she found them all, and she said she rents them from an online service. I suggested our series be about women in different parts of the country who all rented the same dress at different times…and an idea was born.

What is the biggest lesson you want readers to learn from these stories?
I’m not much for teaching lessons; I just want to entertain. But I guess if I had to choose something, it would be that our differences make us unique, but we can still get along and even form families despite being different.

Why did you decide to write romance?
Truthfully, because it was easier to get into back in the late 1990s than women’s fiction, which was my first love. The now-defunct Arabesque line had been founded around 1994, and other publishers of black romance were popping up as well. In an interesting postscript, I now write more romance than women’s fiction because the ideas I get usually fall under this category, so go figure.

Who is your favorite new author and why?
I haven’t read a lot of new authors. Even my reading lately is work-related; a publisher I edit manuscripts for wants me to become familiar with a specific romance subgenre so I can start editing those for her…but I will say I’m rather taken with Penny Wylder.

Who is your favorite established author and why?
I really like the work of Barbara Freethy. I just like her writing.

What’s next for Bettye Griffin?
A novella for my Eighty-Eight series, about a still-vibrant couple in their 50s (yes, they are in their 50s and still getting it on), and then I’ll be buckling down to write the next full-length story in the Eighty-Eight series, which has been in my idea file since the untimely death of Michael Jackson way back in 2009 and which I just published a prequel to (It’s Love She’s After). Alongside all of that, I’m continuing to edit, ghostwrite, and manage writers for clients.

Do you have anything you would like to add?
I’d like to ask anyone reading this who’s not familiar with my work to check out the Freebies page of my publisher website. There they will find samplers and prequels for free download.

Use my affiliate link to purchase your copy of the Holiday Sparkle series bundle.