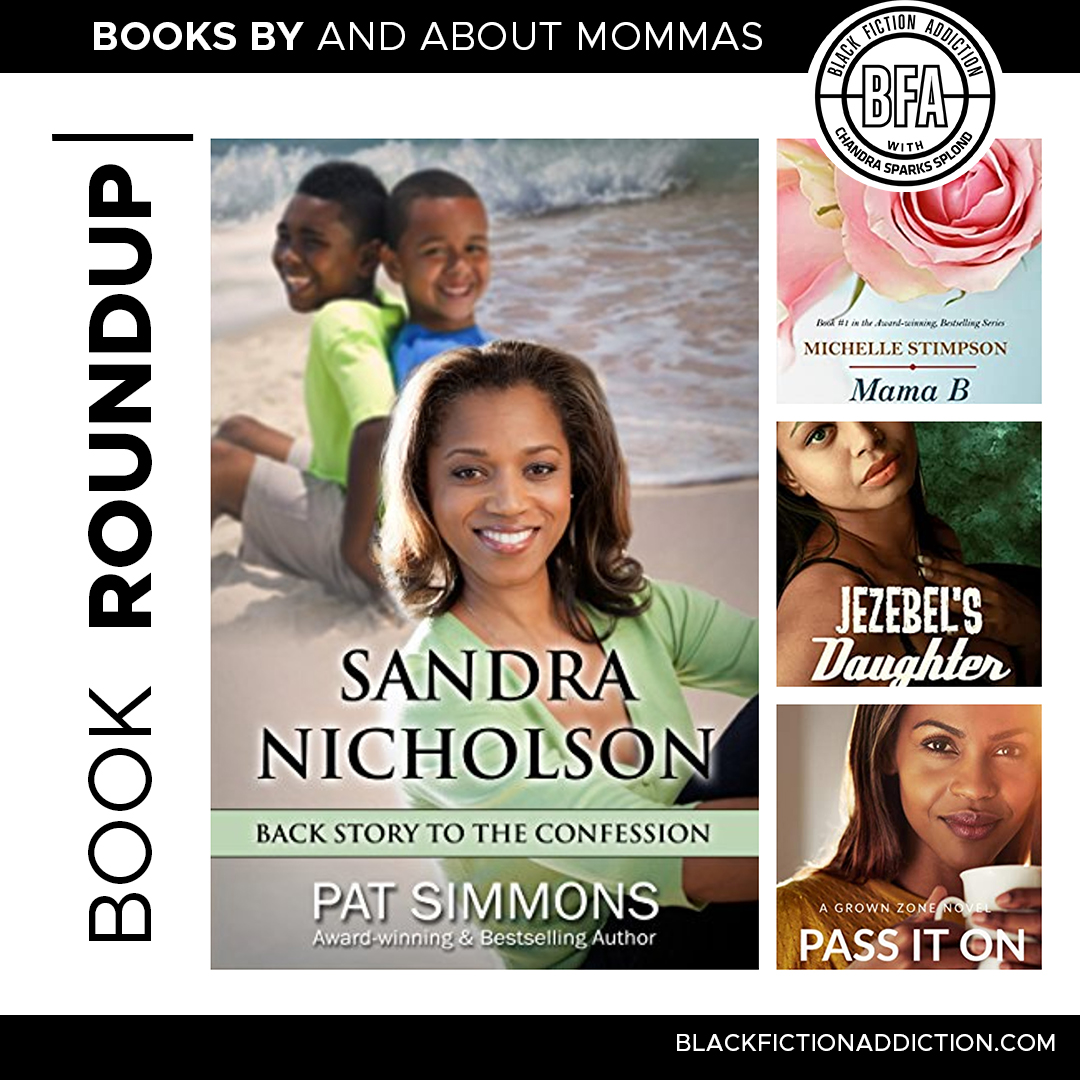 While you’re (hopefully) relaxing this upcoming Mother’s Day weekend, check out these great books by and for mommas.

Sandra Nicholson: Back Story to The Confession (The Jamieson Legacy)
Pat Simmons

There is something to be said about a woman’s first love. Kidd and Ace Jamieson’s father, Samuel Jamieson broke their mother’s heart. Can Sandra Nicholson recover? Her sons don’t believe any man is good enough for her, especially their absentee father. Kidd doesn’t deny his mother should find love again since she never married Samuel. But will she fall for a carbon copy of his father? God’s love gives second chances.

Pass It On
Chandra Sparks Splond

It’s been a long time since Reese Williams can remember things being good. After getting pregnant her senior year of high school, Reese abandoned her dreams of going to college in order to take care of her baby. Now, years later, she’s starting to wonder if life has more to offer. After making a difficult decision, Reese finds herself at rock bottom and considers doing things she never thought she’d do—like returning to her trifling ex. What’s a single momma to do when she wants to pass on the gift of a great life to her daughter?

Mama B: A Time to Speak
Michelle Stimpson

In this first of a series, the good folks at Mt. Zion Baptist are doing their best to keep the church flowing smoothly while Pastor Phillips takes time off to be with his wife in her final days. Beatrice “Mama B” Jackson even opens her home so that the women’s groups can continue to meet faithfully after some “rascal” stole the copper from the church’s air conditioning unit. With her semi-estranged granddaughter and great-grandson staying in the guest room, Mama B soon has a full house. When the interim preacher and his wife start touting messages that don’t line up with the Bible, Mama B wonders how and if she can intervene without causing strife in the congregation or discouraging the young couple.  But Mama B can only take so much of this foolishness. Soon enough, Mama B will realize that there is much more at stake than she or anyone else at Mt. Zion ever imagined. And it’s time to speak.

Jessie Belle Deveraux is gone, but her legacy lives on… Natalia Winters vowed revenge on Jessie Belle from the moment she discovered the reason her father committed suicide. Her pampered, rich girl reputation puts her at odds with almost everyone, but is she sinister enough to push Jessie Belle over the balcony? Reina Cannon spends her days as a much sought after hairstylist and her nights reliving the cruelty of her childhood. For years, she has lived for revenge; to make Jessie Belle suffer for the pain she caused Reina. Her sweet smile and look of innocence is a ruse, a carefully calculated effort to hide a surprising and dangerous truth. Chrissy Barton yearned to take revenge on Jessie Belle—to pay her back for the beating she suffered by unknown assailants. She was no longer a prostitute, but she had never forgotten the triumphant look Jessie Belle had given her … at that very moment, Chrissy vowed she would pay with her life. Three women from very different worlds … a common goal However, Jessie Belle’s family is determined to discover the truth behind the night she ended up on the pavement below her bedroom.

Previous Post: « Tasha M. Scott Is Ready to Help You Fight for Your Next Level
Next Post: Romance Author DL White Crosses the “Line” »