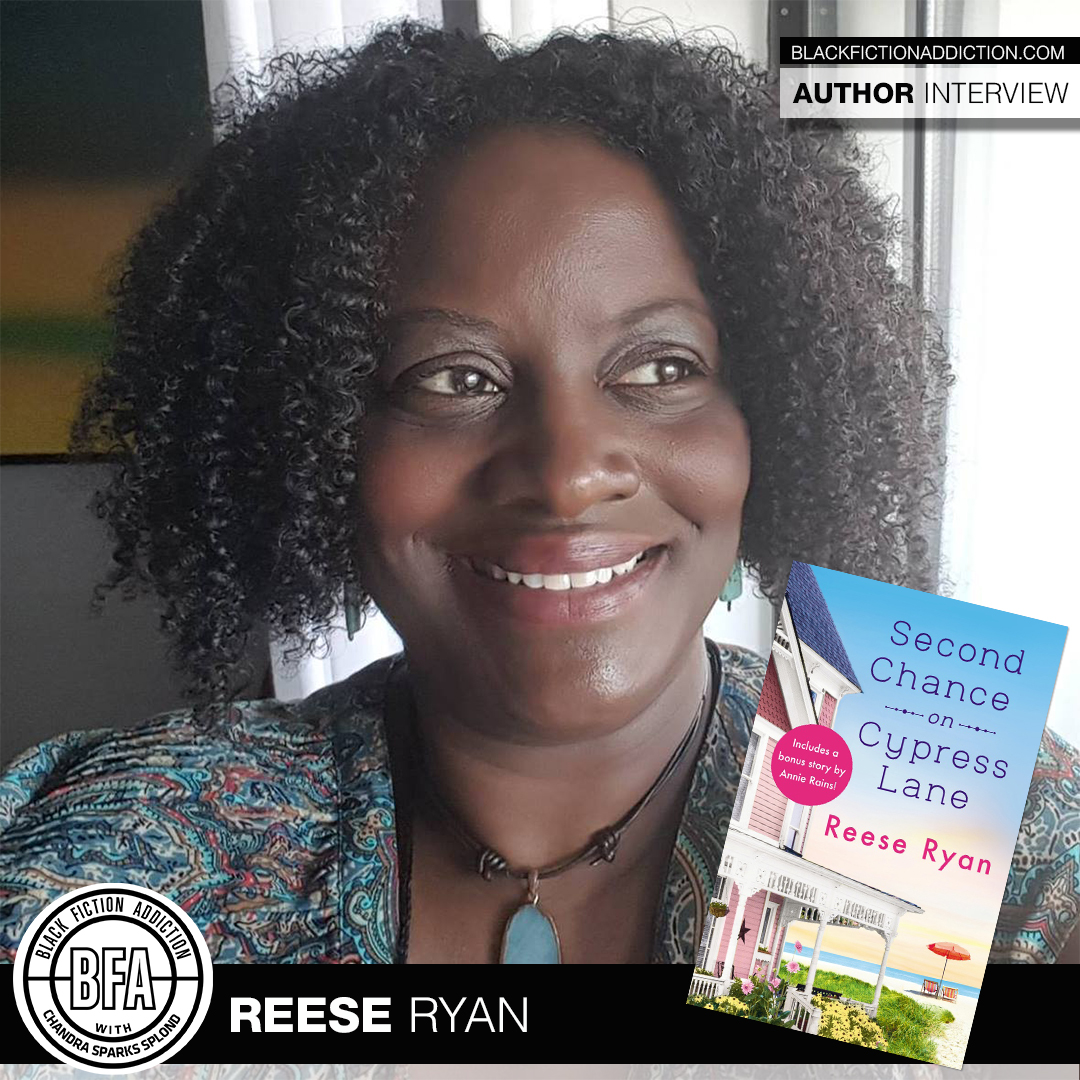 Author Reese Ryan has been busy this year. In addition to launching a new YouTube channel, she also released a new book–with several more to come. Black Fiction Addiction recently spoke with her about Second Chance on Cypress Lane.

Tell me about your book.
When a New York reporter unwittingly becomes involved in an international scandal and loses her promising career, she returns to her small oceanside hometown where she uncovers secrets from the past and gets a second chance at love with the man who broke her heart long ago.

Why did you decide to write it?
The idea for the series was born out of my first trip to the Outer Banks. We stayed in Duck and loved it. I wanted to create a series about a small Outer Banks community. So, I took a couple of days to map out six or seven stories that might happen in this fictional Outer Banks town. Thus, the Holly Grove Island series was born.

You recently launched a YouTube channel. Tell me about it.
Story Behind the Story is my YouTube Channel where romance readers and authors connect. We have reader-centered author discussions on the channel. And in the future, I’ll be doing some chats with readers, too. Starting a YouTube channel is a project I’ve wanted to do for some time. The pandemic pushed me to move forward and launch the project. I’ve had so many fun chats with authors I adore like Brenda Jackson, Beverly Jenkins, Kennedy Ryan, Farrah Rochon, Olivia Dade, Vanessa Riley, Karen Booth, Elle Wright, Sherelle Green, Sheryl Lister, Angelina M. Lopez, and more.

To what do you attribute your success?
First: I have to give credit to Romance Writers of America (RWA). Joining my local RWA Chapter and hearing members sharing the exciting news about their book deals and awards helped me get focused and serious about my writing career.

Second: A few years ago, I made Focus my word for the year, and I also decided to make it my Year of Yes. So I said Yes to lots of opportunities that I would normally have passed on out of fear or self-doubt. Each opportunity seemed to lead to more. Things really took off from there for me.

Third: I’m attributing future success (Yep, I’m claiming it!) to having found my people. Author Tasha L. Harrison started a writer’s group called Wordmakers, and it’s phenomenal. I am so much more focused and productive as a part of this group, and I can’t recommend it enough for authors who are trying to get focused and be consistent and productive.

What do you hope your legacy will be?
After reading Jane Austen’s Pride and Prejudice as a preteen, I wanted to become an author because I too wanted to write stories that made readers laugh and cry; cheer on the protagonists and want to shake them; and learn something new about the world by reading about characters that feel as familiar as their own friends and family. I hope that my legacy as an author is that I’ve done just that, and that I’ve done what I could to leave the world a better place.

What’s the most difficult part of being an author?
The hardest part of being an author is forcing myself to sit down, butt in chair (BIC) and write that first draft. I’m a procrastinator and easily distracted. Add to that the fact that I have what feels like a million things going on right now amid the stress of the pandemic and helping out with my grandkids a couple days a week, so it can be hard to find the time to do what I need to do right now and to be completely focused when I do carve out the time.

What was your most memorable experience writing this book?
Food and music usually play a role in every story I write. In this book, there’s a pretty extensive jazz club scene comprised of several mini-scenes. While I was writing that scene, it was fun going down memory lane to pick a few songs that would be played during a pivotal part of the scene. The two songs that get mentioned in the book are “Cupid” by 112 and “Breaking My Heart (Pretty Brown Eyes)” by Mint Condition. But it was fun writing that extended scene and revisiting lots of great songs from the past.

What’s next for you?
After the release of Second Chance on Cypress Lane on December 1, expect the release of Something About You—a grown folks allies-to-lovers romance being released with Rose Gold Press in January 2021. Then Waking Up Married—a friends-to-lovers, woke-up-married, marriage- of-convenience story and the next chapter in my Bourbon Brothers series is coming March 2021.

Do you have anything you would like to add?
Great questions, Chandra! I can’t think of anything to add.

Use Black Fiction Addiction’s affiliate link to purchase your copy of Second Chance on Cypress Lane.

To learn more about Reese Ryan, author of romantic fiction, visit her website or connect with her on social media.

Waving hello to all the new Black Fiction Addictio

The Marriage Pass Briana Cole Can you really have