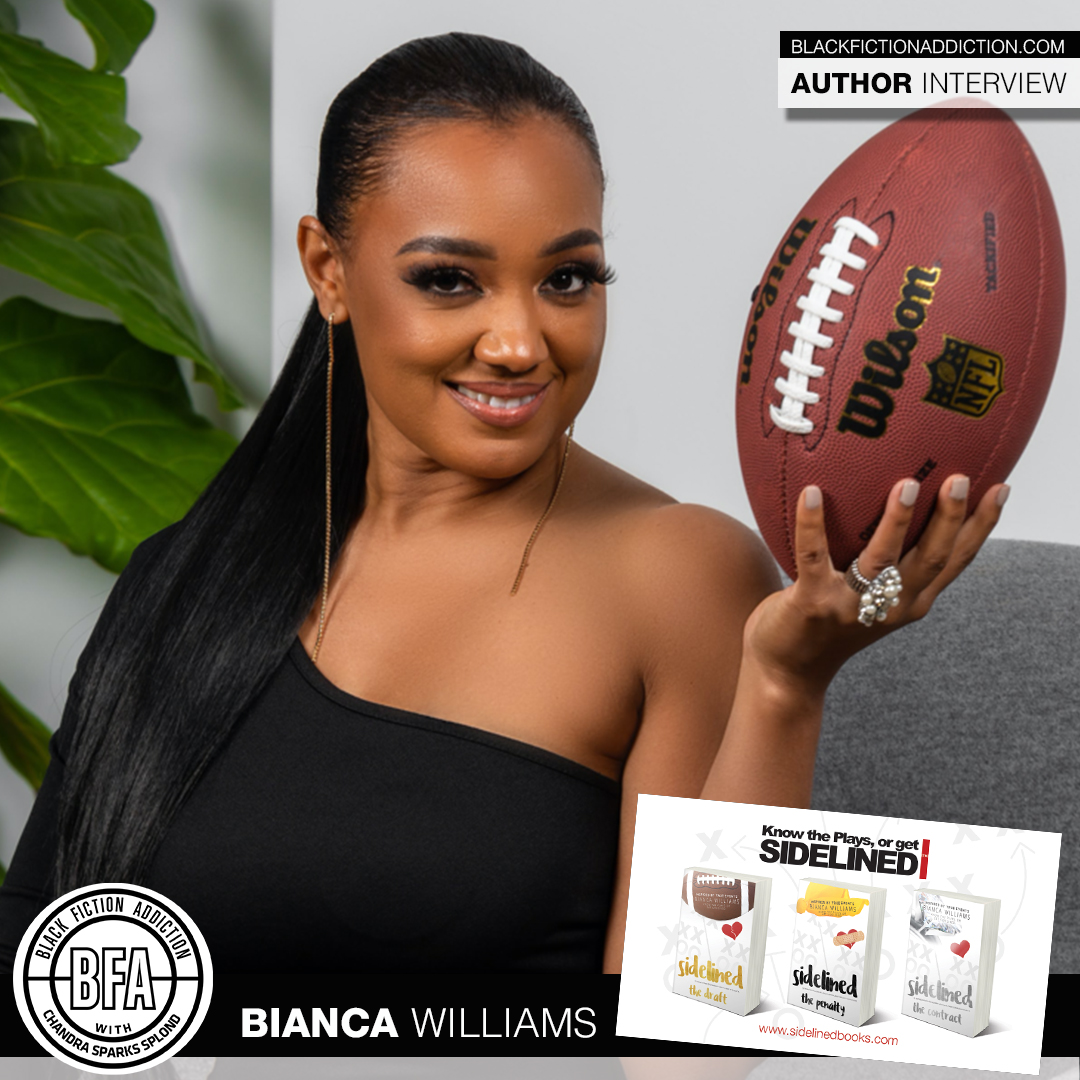 Bianca Williams knows a thing or two about sports romance. She has used her experiences to craft the Sidelined sports romance series, and today she’s stopping by to talk about it.

Your book gives readers a glance into the life of a wag (wives and girlfriends of professional athletes). SIDELINED is inspired by true events, please share what you enjoyed about being a wag. What part of the lifestyle could you do without?
I often say, “it’s all in the details.” Outside of the obvious, amazing sex, five-star travel, and expensive gifts, I personally thoroughly enjoyed being chauffeured around. It may seem insignificant but having a dedicated driver while visiting high-traffic cities are worth their weight in gold. The part of that life I could have certainly done without were the disrespectful women, the ones that didn’t care if you were on their arm or not. Male groupies, who were often worse than female groupies. But most importantly, I could forgo the stress of watching a loved one put themselves at risk every time they stepped on that field. It’s absolutely nerve-racking.

Some readers will cringe at seeing Bryn return to Shane multiple times after seeing red flags. Why do you think it was so hard for her to walk away?
I cringed when I wrote it, but I wanted to show what real love looks like. If you’ve ever truly been in love, you’ve most likely made the same mistakes as Bryn. She wanted to believe Shane, and even though her brain was telling her to walk away, her heart was deeply invested in the relationship. She truly loved him and was willing to fight no matter the price.

In book two, SIDELINED: THE PENALTY, Shane for many readers becomes public enemy number one. He put Bryn through a lot. Why do you think it was so hard for him to manage the relationships with Bryn and Carice?
Shane was a young multi-millionaire in the novel. Carice, the mother of his kids, was with him before the fame. She represented where Shane was at in his life. Bryn on the other hand, represented his potential. There was this ideal man that Shane believed he wanted or could be and Bryn would be that ideal woman on his arm. The Penalty shows Shane struggle with who he truly was and who he wanted to be. He was warring with himself, thus, the constant back and forth shown in the book.

In book three, SIDELINED: THE CONTRACT, Bryn proposes the idea of an agreement between her and Shane in which they both work to safeguard and move their relationship forward. Please share with readers some of your nonnegotiables in business and personal relationships.
For me, a non-negotiable in both business and personal relationships is disrespect. If I feel like I’ve been disrespected or offended, I’m literally almost ready to fight. I’m ashamed to admit it’s that bad.

Your book will be a highly entertaining read for those who enjoyed the reality TV shows Basketball Wives, WAGS and The Real Housewives of Atlanta, but also to the women who enjoy following NFL, NBA and MLB games. What advice do you have for a woman who seeks to date professional athletes?
The terrain is very different. People say it’s just like dating any other man. It’s not. Only elite athletes make it into these leagues, and the majority of them have been coddled and catered to their entire lives. So, the most important advice I could offer is to make sure that although he is the star on the field, you’re co-stars in the relationship. It’s so important not to lose yourself by getting caught up in their fantasy life. It’s a slippery slope. Keep the scales balanced and let them know that your emotional, physical, and mental needs are just as important as theirs.

There is a growing trend of more African-American novels being adapted to film independently for cable and streaming or optioned by celebrity production companies. If SIDELINED was optioned, who would you cast to play the lead characters Bryn, Jen, Shane, Terry and Carice.
I’ve thought about this during my entire writing process. I’ve always dreamed of SIDELINED making it to the screen. In fact, it actually started with a vision, so I was unsure if I was supposed to write a novel or a script. For my lead characters, I would cast Tessa Thompson as Bryn. Tika Sumpter as Jen. My ideal Shane was the beloved Chadwick Boseman, may he rest in peace. I haven’t thought of a replacement yet. I would cast Terrence J as Terry and Ciara would make her acting debut as Carice.

What do you want readers to take away from the SIDELINED series?
I’d like readers, especially women, to trust their inner voice. Your intuition is your guide and most times will not lead you astray. I’d also like readers to learn the power of forgiveness. It’s amazing what baggage we can truly unpack when we practice forgiveness.

What can we expect in your follow-up to SIDELINED?
I’m working on a non-fiction component titled, Know the Plays or get Sidelined (in life, business, and relationships.) It will be a playbook for women to develop a strategic plan to apply to anything that they want to accomplish.

Bianca Williams discovered her love for creative writing while pursuing a double major in Finance & Management at Chestnut Hill College in Philadelphia. After graduating at the top of her class, achieving a successful career in finance, and co-founding an event planning company, Bianca began penning her debut novel. When she isn’t writing, Bianca uses her platform to empower young women in personal development, business, and relationships. @bwillbooks

Previous Post: « Aja Is Writing Romance for Your Heart and ‘Soul’
Next Post: Romance Author Elle Wright Saves the Best for Last »

Child of Tempus Winnifred Tataw Rodrick is a prin

It’s Sunday Funday. Which three are you picking?

Succubus Jade Jones Love is just a game to Tremai