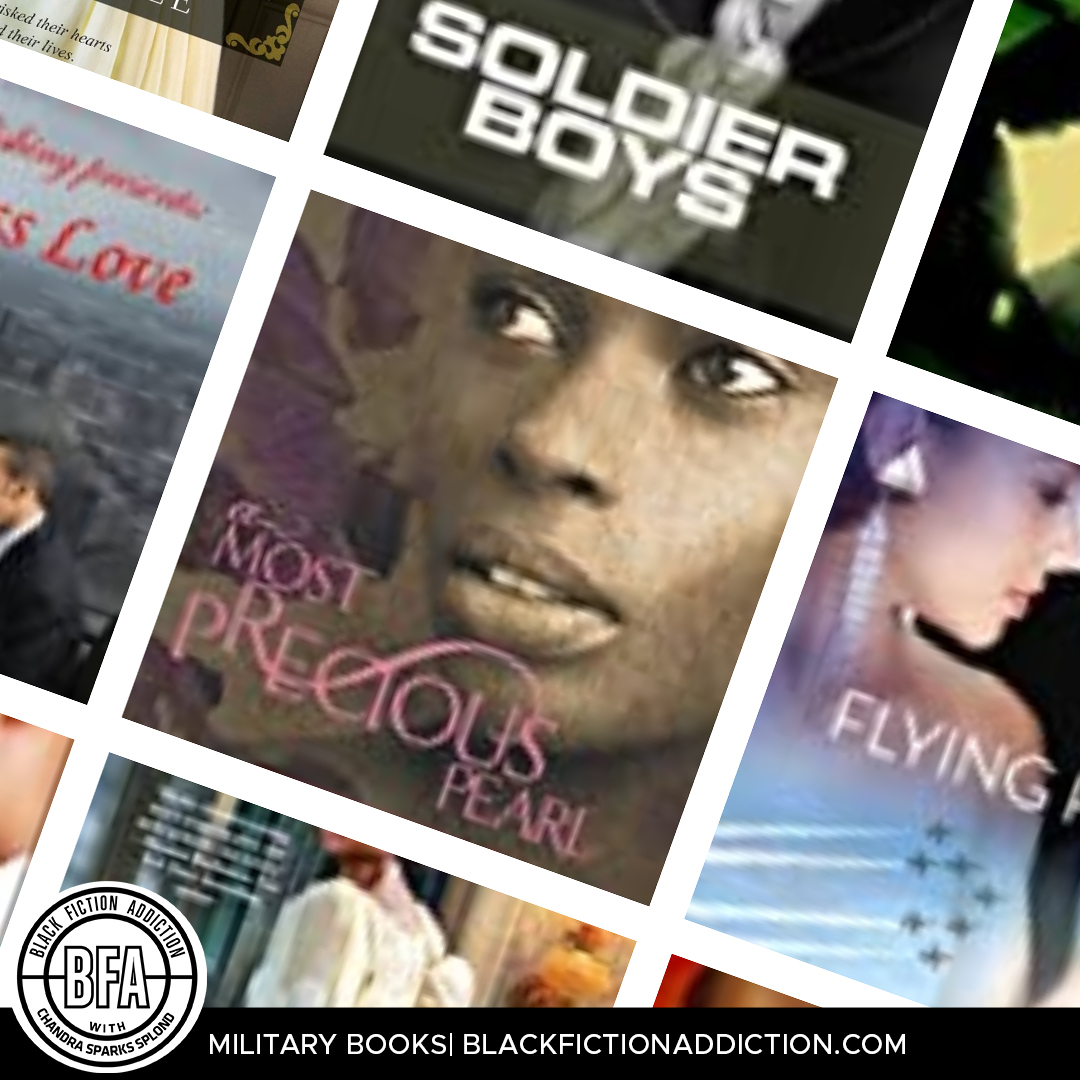 In honor of Veterans Day, we’re spotlighting black fiction with a military element.

Sisters in Arms by Kaia Alderson

Grace Steele and Eliza Jones may be from completely different backgrounds, but when it comes to the army, specifically the Women’s Army Auxiliary Corps (WAAC), they are both starting from the same level. Not only will they be among the first class of female officers the army has even seen, they are also the first Black women allowed to serve.

As these courageous women help to form the 6888th Central Postal Directory Battalion, they are dealing with more than just army bureaucracy—everyone is determined to see this experiment fail. For two northern women, learning to navigate their way through the segregated army may be tougher than boot camp. Grace and Eliza know that there is no room for error; they must be more perfect than everyone else.

When they finally make it overseas, to England and then France, Grace and Eliza will at last be able to do their parts for the country they love, whatever the risk to themselves.

Based on the true story of the 6888th Postal Battalion (the Six Triple Eight), Sisters in Arms explores the untold story of what life was like for the only all-Black, female U.S. battalion to be deployed overseas during World War II.

An Extraordinary Union by Alyssa Cole

A former slave finds danger, intrigue, and passion undercover as a spy in first of this Civil War–era romance series from an award-winning author.

Elle Burns is a former slave with a passion for justice and an eidetic memory. Trading in her life of freedom in Massachusetts, she returns to the indignity of slavery in the South—to spy for the Union Army.

Malcolm McCall is a detective for Pinkerton’s Secret Service. Subterfuge is his calling, but he’s facing his deadliest mission yet—risking his life to infiltrate a Rebel enclave in Virginia.

Two undercover agents who share a common cause—and an undeniable attraction—Malcolm and Elle join forces when they discover a plot that could turn the tide of the war in the Confederacy’s favor. Caught in a tightening web of wartime intrigue, and fighting a fiery and forbidden love, Malcolm and Elle must make their boldest move to preserve the Union at any cost—even if it means losing each other. . .

U.S. marine Colonel Nelson Wainwright was lucky to make it back from Afghanistan alive after his helicopter went down in a blaze of machine gunfire. Now he’s bent on denying the excruciating pain he still feels months after the crash, fearing it will keep him from attaining the only thing he wants—a promotion to four-star general. But when he meets the distractingly beautiful Audrey Powers, his world is rocked. Could there be something Nelson desires more than four stars?

As a physician, Audrey knows the pain in Nelson’s neck could mean trouble—and when her interest in him becomes more than medical, she’s got some trouble herself. Scarred by an early heartbreak, she wants nothing to do with a romantic involvement. Now, as their lives intertwine, the two find it’s time to face old wounds, and discover whether new love has the power to heal their hearts…forever.

A Most Precious Pearl by Piper G. Huguley

They’re cut from different cloths…but their hearts are a perfect fit. Migrations of the Heart, Book 2 Asa Caldwell returned from the Great War with nothing to show for it-as in nothing below his left knee. Forget about the journalism career he loved. His story is over. Done. Yet he finds the strength to journey to Winslow, Georgia, to get Ruby Bledsoe Morson’s sister out of trouble. Before he can bring Mags Bledsoe home, though, a spate of mysterious attacks reawakens his investigative instincts. During the war, Mags did her duty to God and country by stepping into a management role at the textile mill. Now she’s been shuffled back to the rank and file-and Asa has her hard-earned job. Not only is the infernal man doing everything wrong, her plan for revenge against the mill owner who lynched her childhood sweetheart is farther out of reach than ever. As they clash over almost everything, Mags begins to set fire to Asa’s soul, bright enough to dim the memory of the killing fields of France. Enough to give him a new mission in life-to make her feel the same way. Warning: Contains a wounded warrior who’s done with fighting…and one feisty woman who makes him snap to attention.

After five years, navy SEAL Brisbane Westmoreland is back home and ready to reclaim the woman he left behind. He won’t let anyone—his family or hers—stand in the way of his mission. But Crystal Newsome’s nowhere to be found. When he hires a private investigator to track her to Dallas, Bane’s in for a shock.

Crystal Newsome isn’t ready to forgive Bane for saying he loved her then vanishing from her life. He can’t just expect her to be at his beck and call, picking up where they left off like nothing happened. But no matter how much she hates to admit it, right now the beautiful chemist needs his protection. Her life is under threat after her lab made a revolutionary discovery that could fall into the wrong hands, and Crystal has nowhere else to turn. As Bane settles in to ensure her safety, their irresistible chemistry takes over once again. But can Bane keep Crystal safe and convince her they can have the second chance they both deserve?

Through the Storm by Beverly Jenkins

Raimond Le Veq needed to marry to gain his inheritance and restore the fortunes of the House of Le Veq, the proud Black New Orleans family whose wealth had been ravaged by the War Between the States. Still wounded by the double-cross of the only woman he ever came close to loving, he gave the choice of bride to his mother. But he never be expected that she would pick Sable Fontaine–the beautiful former slave he could not allow himself to trust again.

Betrayed and sold to a cruel neighbor, Sable did whatever it took escape. With the spirits of her royal African ancestors guiding her, she made a bold bid for freedom, and won. But along the way she had to hurt the charming Union Major Le Veq, who had romanced her and championed her. Now fate has brought them back together in a marriage of convenience. Can she convince Raimond she was never a Rebel spy, and that this time, she’d choose him above all else?

In First Class Love, you’re introduced to Regina Louise Hinson and Jeremy Trey Love. After spending just one passionate night together overseas in the early eighties, their romance is put on the backburner because of military duties. While Trey is on his secret mission, Regina finds out she’s carrying his child.

Missing the man who stole her heart, Regina is discharged from the Navy before he returns and moves back home with their son. She’s trying to live her dream of teaching when problems arise. Her father is ailing, she’s diagnosed with a medical condition, and one of her handsome co-workers is showing interest in her. Is she ready to let another man in her heart, or does it belong to the Navy SEAL, her first love?

Live a Little by Rhonda McKnight

Raine Still has never had much of an identity outside of being the daughter of the old hippie couple that own Hope House, a transitional housing facility in the worst part of Charlotte, North Carolina, and that had been okay with her until her parents died and left her alone in world.

Gage Jordan is a decorated solider discharged from the army after fourteen years due to a physical injury, but the emotional scars are far worse than anything he’s rehabbed from. He has a great job lined up and a mass of support from his family, but something is missing and he’s starting to feel like it’s Raine.

Gage thought his wounded heart had issues, but Raine’s pain is much deeper. If something doesn’t give soon they will never have a chance at love. Can he convince her to see that “hope” and faith are the balm she needs to heal her hurting soul?

Meet Sergeant Sanderella Coffee, who has just completed a three-year overseas tour and is now reporting to a military installation in Virginia. She is a single mother whose goal is to attend the Army’s prestigious Officer Candidate School, which will guarantee a better life for her and her children.

Sandie meets a man who matches her ambition and determination step for step in the form of Drill Sergeant Romulus Caesar, who literally marches into her life and turns it upside down. They fall in love, and Rom is everything Sandie could want—supportive, confident, self-reliant—but he’s also married. Because of the military’s tough policy on fraternization and adultery, Sandie could find her carefully orchestrated career slipping away like sand in a breeze.

Whether in trouble or in love a girl can always count on a soldier.

In Deirdre Savoy’s Tell It To the Marine, a sexy songstress falls head over heels for a sexy younger Marine.

Angela Weaver’s Love Freefall a woman tests her nerve and falls into the arms of handsome Air Force pilot.

Edwina Martin-Arnold’s Recruiting Dora a feisty mom takes on a charming Navy recruiter who thinks her son will make the perfect soldier.

In J.M. Jeffries’ Going Commando a TV star gets stranded in the desert and rocks the Kasbah with a studly Delta Force commando.

Emotionally wounded veteran, Goliath is on a quest to be alone and out of anyone’s business but his own. The problem is the small town he chooses has the potential to prevent that from happening. Who knew his downfall would lead to the carefree neighbor, Phoebe, interrupting his drowning flow in an attempt to rescue Goliath from himself. Despite being angry, Goliath is intrigued by this woman who has set her sights on helping him despite the numerous attempts to get rid of her. Neither knows the other’s secret….Will things change once they are revealed? Take the journey to read about Goliath and Phoebe …