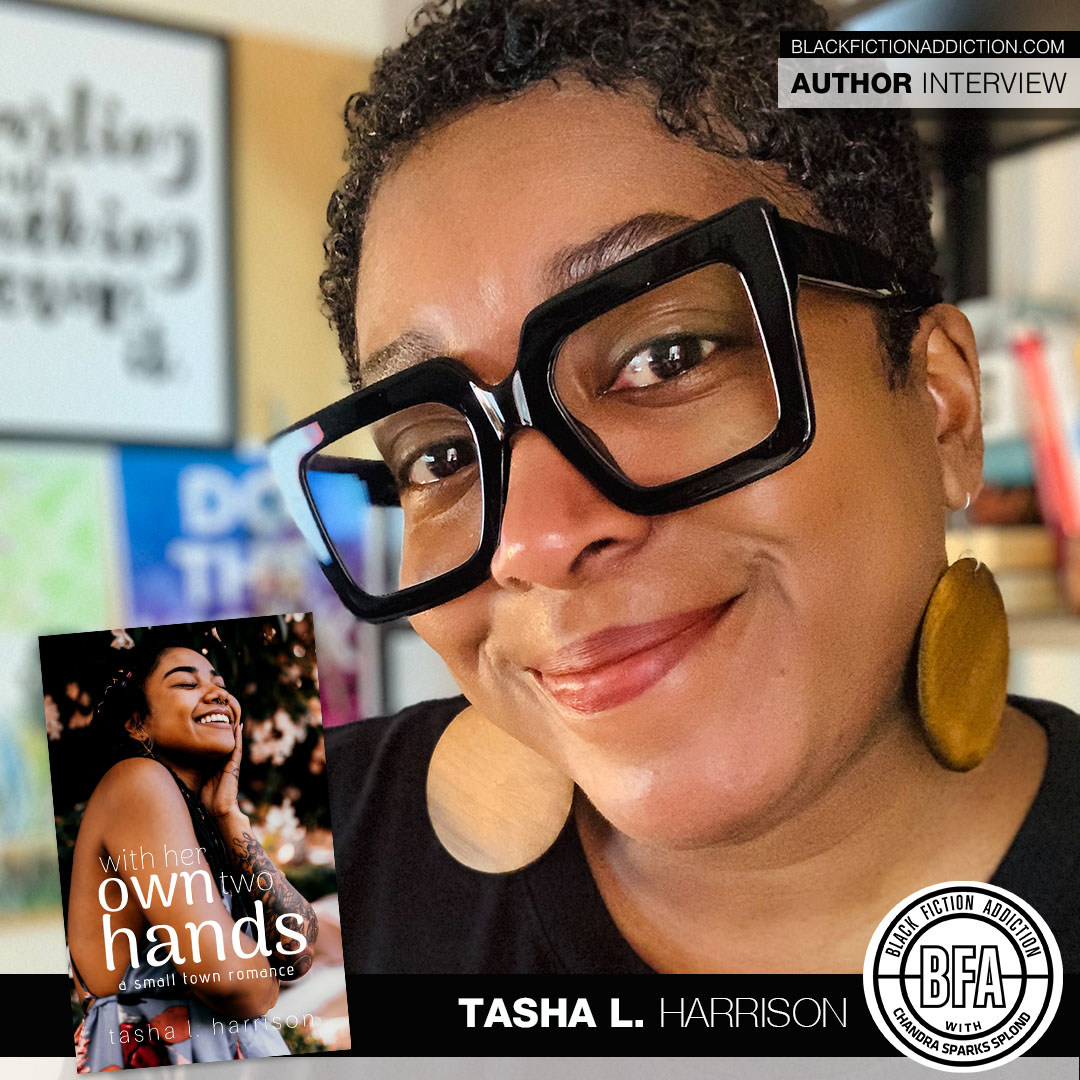 Author Tasha L. Harrison is back with the final book in her Small Town Romance Series. I recently spoke with her about With Her Own Two Hands.

Tell me about your latest book.
My upcoming release is With Her Own Two Hands, the third book in my Small Town Romance Series which began with A Taste of Her Own Medicine. This third book in the Malone Sisters Trilogy, tells the story of Agostina Malone, the middle sister who is clairsentient and also bipolar. Her hero is Julian Webster, a painter who has relocated to Greenville after ending a bad relationship. He’s also a character from a previous series The Lust Diaries.

What inspired you to write it?
I’ve always wanted to write a small town romance, and already had several snippets and things that I kept in my idea file. The story and the series itself were created on a whim when I announced the first #20kin5Days writing challenge. I started the challenge to give my inspiration a jumpstart. Two years later, both are still going strong.

When did you fall in love with the written word?
I’ve always been a storyteller. Before I could write or read, I created elaborate stories about my Barbies and the lives they lead that were as detailed and chaotically plotted as all of the nighttime soaps my mom sent me to bed to watch. However, the first thing I wrote that made me think, hmmm, I might be good at this was a poem I wrote for my grandmother on Mother’s Day called “Grandmother if You Lived in Biblical Times.” I memorized it and recited it for and also gave her a framed print of it in a shadow box. I still remember that poem, and under the influence of enough whiskey, I can be convinced to recite it.

What books have you read lately and loved?
Reading has been difficult for me during this pan la dulce, but I switched to audiobooks pretty early on and that has definitely helped! Razorblade Tears and Blacktop Wasteland by S.A. Cosby have been absolute favs, and I will evangelize to any and everyone who will listen to me talk about those books. Still thinking about those characters months after reading. I also recently listened to all of Alice Hoffman’s Practical Magic Series. Such lush writing and surprisingly, I liked Practical Magic the least of those three books! Of the books that I’ve read with my actual eyeballs, Back in The Day by my friend-girl Katrina Jackson was excellent and explores a stage of love not often depicted in contemporary romance. But honestly, I reserve eyeball reading for nonfiction and educational text.

Who would you cast in a movie to play your main characters?
I’m really not all that big on face claiming. I know! My brain just doesn’t work that way. But if I were forced to choose, Agostina would probably be Rihanna when she sported those faux locs for a bit. For Julian, I don’t really have a good choice, but I think of him as a dark-skinned Boris Kodjoe.

What’s next for you?
What’s next? Probably an older woman/younger man romance I started writing during 20kin5Days September called Hers to Ruin. This one will be set on the coast of South Carolina in Beaufort. It’s my dessert project, and I feel like it would be fun to write. The heroine is a 40-plus manic pixie dream girl, so she’s already dancing around in my subconscious, dying to be written.

To learn more about Tasha L. Harrison, purveyor of filthy fiction with feelings and creator of #20kin5Days and the Wordmakers writing group, visit her website or connect with her on social media.

Use the Black Fiction Addiction affiliate link to purchase your copy of With Her Own Two Hands.

Previous Post: « Check Out These Black Books Released in October 2021
Next Post: Author Yasmin Angoe Talks ‘Her Name Is Knight’ »