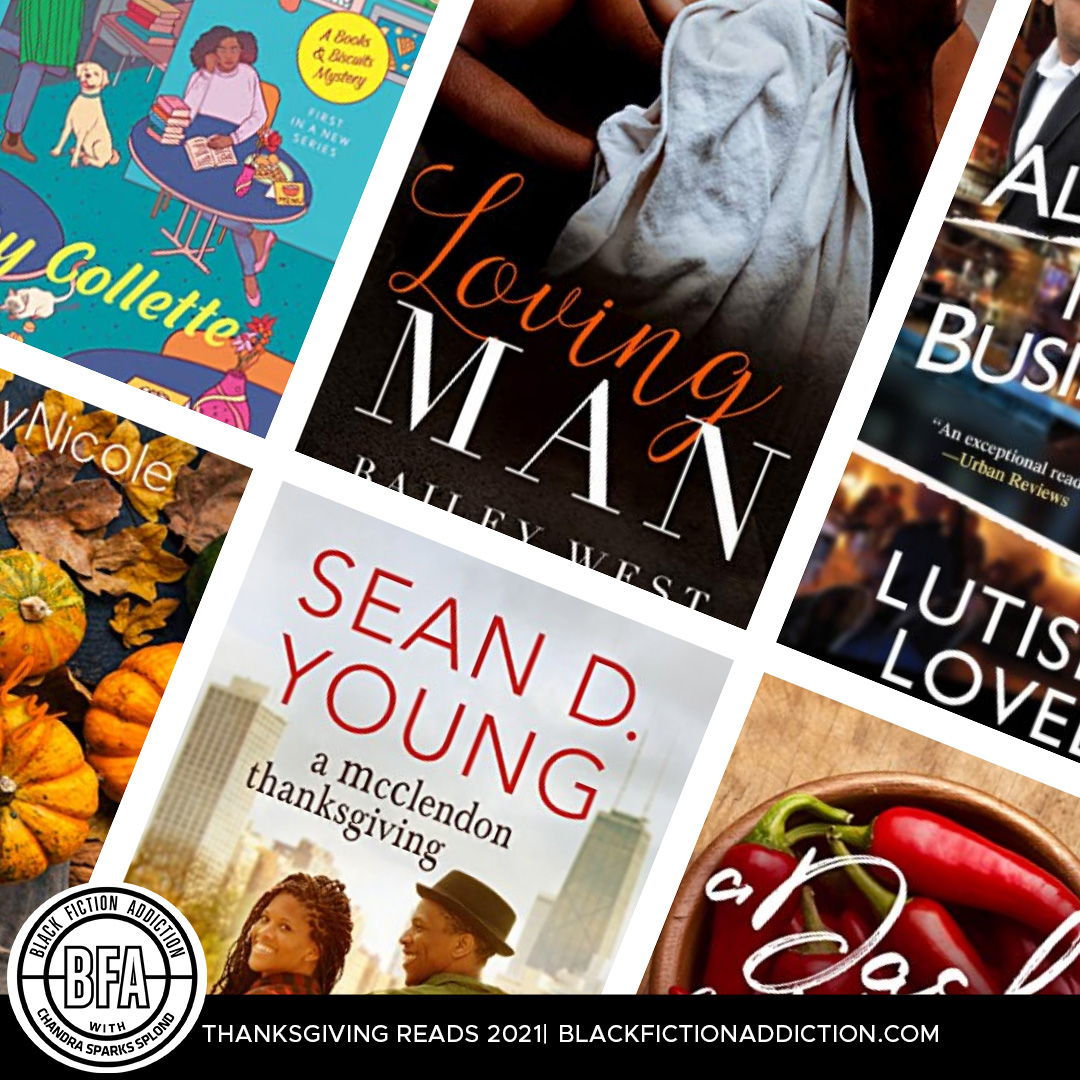 Isn’t it crazy that Thanksgiving is already here? Hopefully by the time you receive this post, you’ll be preparing for a few days off. Here are a few books featuring food, finding love, and family to give you all the holiday feels.

Leslie and Blink shared a little stuffing last year. This time around they’re looking for so much more. It was supposed to be one fleeting moment. After a second encounter and more time spent together, are they ready to admit that maybe they want a little more?

In this page-turning new mystery series, fraternal twins Keaton and Koby will pull double duty when they take down a killer while preparing to open their new bookstore and soul-food café, Books & Biscuits.

When Koby Hill and Keaton Rutledge were orphaned at age two, they were separated, but their unbreakable connection lingered. Years later, they reunite and decide to make up for lost time and capitalize on their shared interests by opening up a well-stocked bookstore and cozy soul-food café in the quaint Pacific Northwest town of Timber Lake. But this new chapter of their lives could end on a cliffhanger after Koby’s foster brother is found murdered.

The murder, which occurred in public between light-rail stops, seems impossible for the police to solve. But as Keaton and Koby know, two heads are always better than one, especially when it comes to mysteries. With just a week to go before the grand opening of their new café, the twins will use their revitalized connection with each other to make sure this is the killer’s final page.

A Dash of Heat

Maggie Augustin just wanted something sweet. A bit of self-soothing, to take the edge off the loneliness and heartache she’d been quietly enduring. When she walks away from his food truck, box of beignets in hand, she has no idea that Rene St. Martin – not his pastries – is exactly the something sweet she wanted, with the little dash of heat she needs.

All Up In My Business

Malcolm and Toussaint Livingston, the siblings behind the dynamo restaurant chain Taste of Soul, work hard and play even harder—especially carefree bachelor Toussaint, who loves as much variety in his sexual conquests as he does spices in his sparerib rub. But when he meets interior designer Alexis St. Clair, his Casanova days could be over. Because Alexis refuses to become just another dish on Toussaint’s mating menu . . .

As for Malcolm, he may be married with children, but that doesn’t stop him from flirting—nor does it slow down the women who want more from him than the secret recipe to the family’s BBQ sauce. These two brothers love a challenge, but what happens when bedroom games get all up in their business?

The week of the culinary conference was Xander Northcott’s time to shine. Fresh out of a long-term relationship, he cemented his newly single status by accepting Piper Andrews’s invitation back to her room that first night. It was all fun and games until a few months later, when he received a phone call from the woman he barely knew.

She was pregnant—with his child.

Heralded as a culinary savant, Angel Saint Rose studied alongside the world’s best Chocolatiers. It wasn’t just a job for her. When honing her skills with chocolate confections, she was in her element—until she received a phone call that changed her life.

And killed her passion.

Fashion designer Faith McClendon is back in Chicago to start over. She put her promising career on hold for too long, and she’s ready to get back in the game. She’s not willing to put her heart on the line again—it’s still far too bruised from her failed marriage for that, so when a renewed childhood friendship starts to make her think about second chances at love, she’s more than a little hesitant.

Photographer Michael Montgomery was Faith’s biggest cheerleader when she decided to move to New York City, and he’s been her shoulder to cry on since she came home to Chicago. He’s never been able to tell her how he feels, but maybe now is his chance to make the family portrait in his head—the one with Faith by his side—a reality. First, he’s going to have to break down the walls Faith has around her heart and convince her they can be so much more than friends.