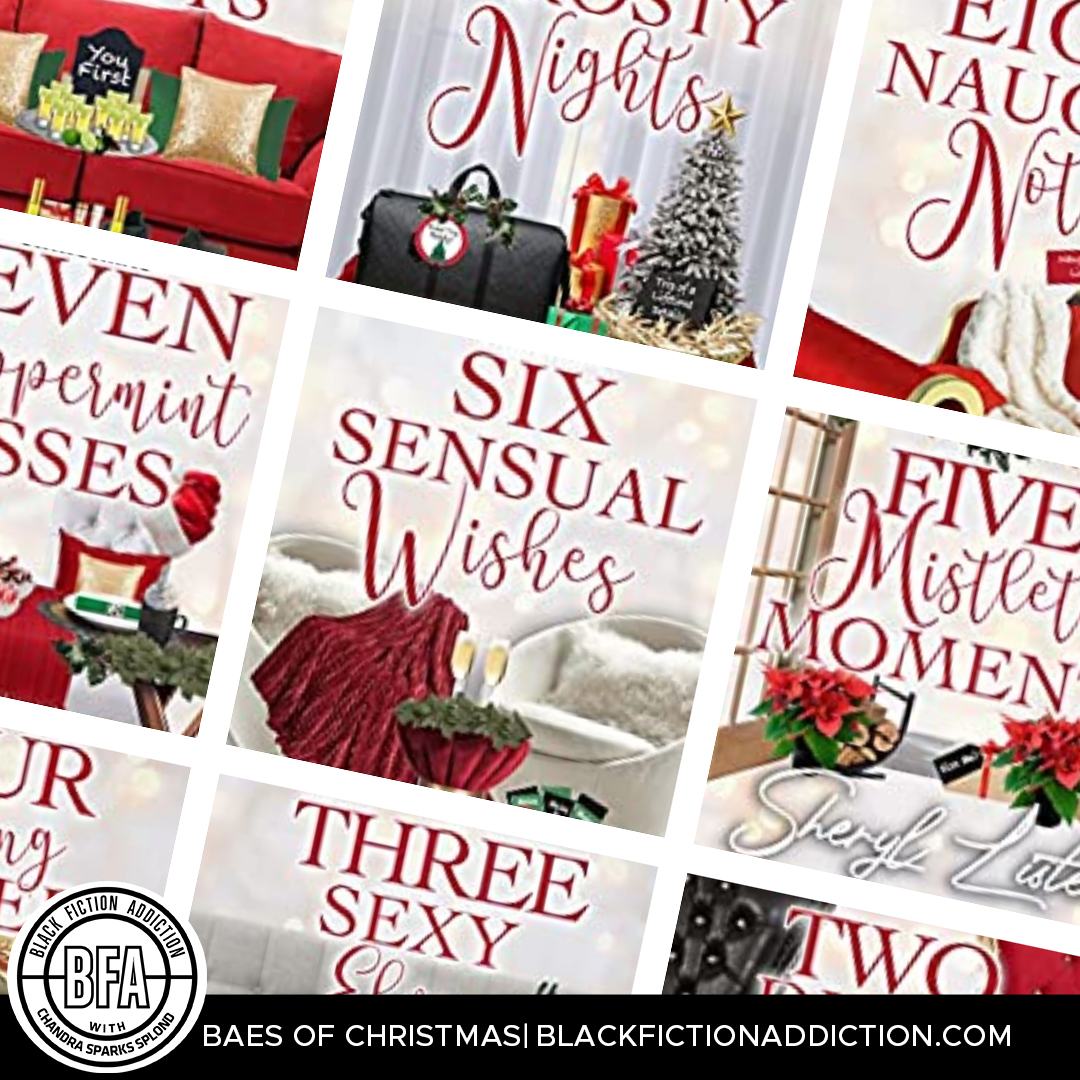 If you’re looking for new holiday reads, look no further. Starting today (December 15) and every day until Christmas Eve, some your favorite and soon-to-be favorite authors are delivering the Baes of Christmas.

Apparently, my besties are tired of my Scrooge-like behavior. Instead of commiserating with me at my annual nonChristmas, foreverSingle party, they’re forcing me to go on a luxury trip to the worst magical place on Earth—for two.

I’ve never been girlfriend material. Too much work, not enough good feelings. Now I have ten dates, ten shots to find a plus one. The one caveat? My friends pick the dates—even ex-boyfriends are not off limits.

Dealing with the past, stepping outside of my comfort zone, meeting strangers… What can go wrong? Everything. Or nothing. I can’t decide which is scarier. A long time ago, I vowed to only let my brain make the important decisions. What if my heart didn’t get the memo?

I was unceremoniously dumped after winning a ten-day/nine-night trip to Iceland, but I’m determined to forget about my failed relationship and finally focus on my wants and needs. Too bad only thing I really want for Christmas is her.

I knew better than to mix business with pleasure. Yet, I’d done so, and paid a hefty price. I’m ready to prove I’m more than my mistakes, but my newest client is tempting me to be a repeat offender.

Tori Clark knew at a very young age that she’d have to make sacrifices to reach her goals of becoming one of the most trusted Pediatricians in Pittsburgh. Tori didn’t have the luxury of partying, traveling, or even falling in love. But she did in fact fall in love with Christian Powers, a man going through his residency training right alongside her. They were both among the best and brightest stars in their program with very few chances to take R&R, but somehow they managed to sneak in a few moments that brought them closer together. It was with Christian that Tori learned to laugh, and how to cry out in pleasure. When Tori receives a reminder of what her first passion is, she decides to break things off with Christian to preserve herself and her life goals.

Years later, Christian, now a top Pediatric Intensivist, returns to the place of his residency, not only for an opening at the Children’s Hospital, but also for a second opportunity at love.

Warm up your holiday with this hot second chance romance.

Tori Clark first appears in For Once, however you can enjoy her story without reading it.

Visit ajathewriter.com for more information on Aja and her work.

Excited to win a romantic helicopter ride for two during the most wonderful time of the year, Pepper Lockridge knows just the person to invite. The sexy and oh so charismatic, Tyler Cage. He’s been her crush since college and now that they work for the same logo company, she’s determined to make him see her as more than a friend. With the help of a make-over, she has seven days to get Tyler to really notice her and accept her invitation. And maybe her Christmas wish will come true, and Tyler will finally kiss her as they fly over the Hudson River. Except the only one who seems to be paying attention to the new and improved Pepper is their boss. Tyler’s hot, yet forever brooding older brother, Sawyer Cage.

“All work and no play makes Eva Archer a dull girl.”

Those were the words uttered by her boss and close friend Sebastian “Bash” Wood right before her surprised her with the trip of a lifetime— a seven day, six night stay on an ultra-exclusive, upscale resort. It was just the type of getaway that Eva both deserved and needed, but there was one problem…Bash would be joining her.

Sebastian has seen Eva work hard to make sure everyone else in her life is doing well, but makes it his personal mission to ensure that not only does she enjoy herself on this trip, but that she achieves maximum nirvana. His motives are not all altruistic, however, as he sees his chance to finally act on feelings for Eva that he’s kept shuttered away for quite some time.

Mia Broussard has never believed in love at first kiss, until Dwight Albright. With so many relationship misses, she’s not sure she believes that the unique connection and explosive chemistry they share is the real thing. But Dwight promises to make this a Christmas she’ll never forget…if she’d only trust him.

After a devastating loss, Dwight has led an existence dominated by loneliness. When Mia enters his life, he knows he’s been given a second chance to love. She’s the woman he wants under the mistletoe this year and every year. And he intends to prove to her—one smoldering kiss at a time—that she’s meant to be his. Forever.

Grant’s Four Unbreakable Rules:
Rule #4 – always put animals first
Rule #3 – be there for your family above anything else
Rule #2 – never date someone from your small hometown
Rule #1 – your best friend’s ex is off limits

I, Grant Keating – vet of all vets and a true small-town gentleman – am a terrible person. Not only do I manage to break all my rules before the holidays, but I’m positive all the coal left in every naughty person’s stocking won’t be enough to redeem me for breaking a rule I never needed to have. The golden rule that should have been a damn guarantee!

If I let her, she might just cost me everything. Yet, I couldn’t walk away now even if I tried.

Who says you can’t have it all? Love, that’s who. Being dumped three weeks before Christmas by my fiancé was enough for a girl like me to take a chance and risk it all. Wait! I’ve never been the adventurous type. In fact, I’m the lame type. Until my cousin comes up with a non-brilliant idea to have me bid on a 3-day singles Christmas cruise.

Problem is, I hate water, boats and there’s a whole list. Which is enough reason to send me running in the opposite direction when I find out I won. However, cruising is on my bucket list and a fear I’d love to conquer before my aching heart takes me out.

The other issue is —the boat leaves from my hometown — a place I vowed to never step foot in again due to a person who shall remain nameless. Yet, I need this vacation and my mind needs the release. Maybe I can sneak into town without being noticed? Then I see him and… damn, aging has only made him sexier!

“It was an accident.”

Those are the four words I told my boyfriend after a mistaken Santa incident that I have been trying not to think about since it happened. He probably would have forgiven me if I’d admitted my screw up right away. Instead, he found out in a public recap video of the Holiday Crowne Charity Gala. Now, it looks like I have a Santa fetish. Nothing says happy holidays like two public disasters with two different men and one extremely overwhelming decision.

Both are amazing. Both are mesmerizing. Neither is making her decision easy.

‘Tis the season for getting great gifts and Teesha Palmer just won the trip of a lifetime to the French Alps. The only pitfall to her holiday vacation is the appearance of her distractingly sexy friend-turned-enemy, Kendrick McLaughlin. An unexpected blizzard that traps them in a mountain-side cabin might be exactly what they needed to face the past…and one snowy night is all it takes to convince Teesha and Kendrick that some things are better together.