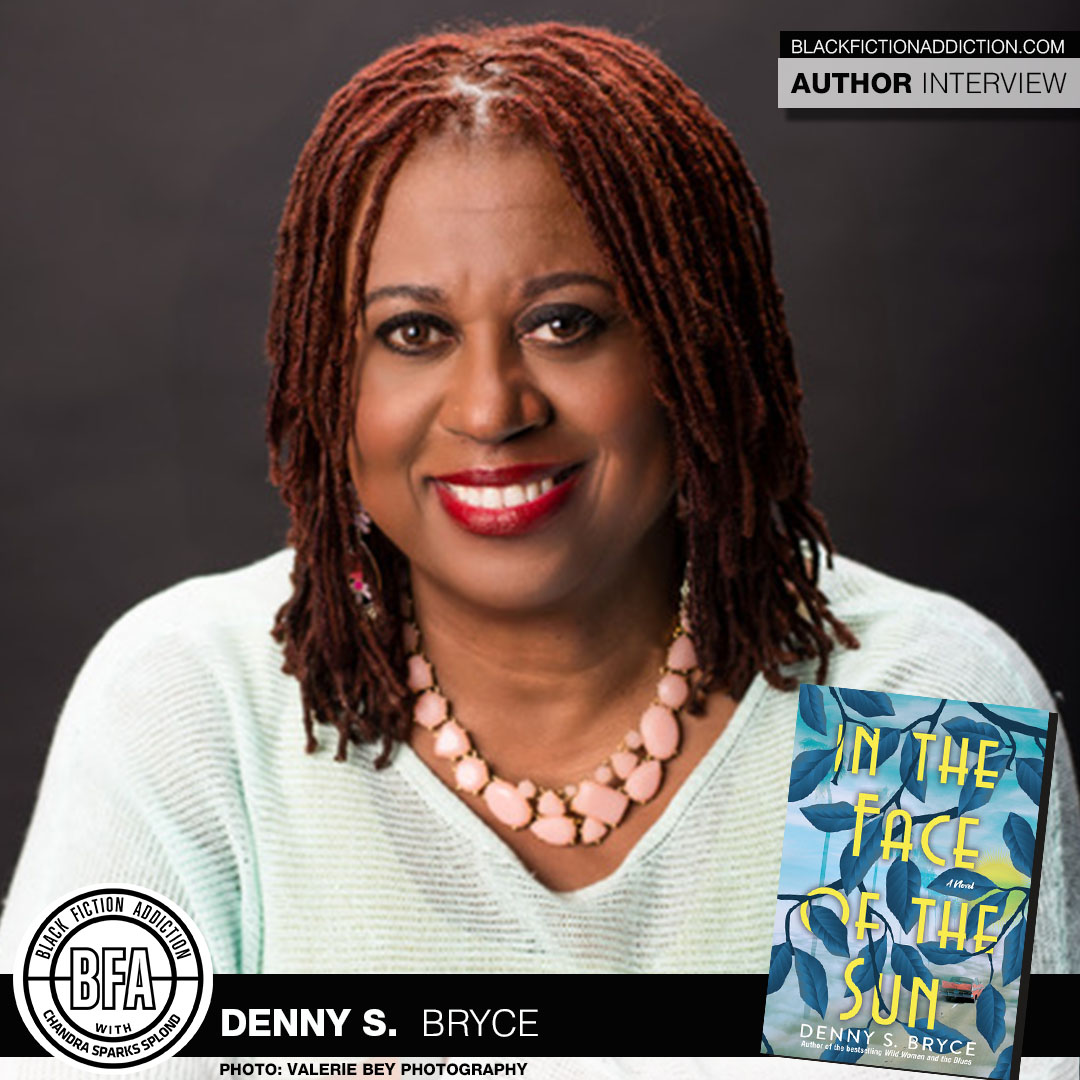 Author Denny S. Bryce is back with another dual storyline novel. I recently spoke with her about In the Face of the Sun.

IN THE FACE OF THE SUN by Denny S. Bryce

A candy-apple red Ford Mustang is parked outside my building. Unmistakable. My Aunt Daisy, the driver, is an audacious woman that no one in our family actually speaks to. They only speak about her—and not glowingly. Still, she is part of my escape plan…

1928, Los Angeles: The newly-built Hotel Somerville is the hotspot for the city’s glittering African-American elite. It embodies prosperity and dreams of equality for all—especially Daisy Washington. An up-and-coming journalist, Daisy anonymously chronicles fierce activism and behind-the-scenes Hollywood scandals in order to save her family from poverty. But power in the City of Angels is also fueled by racism, greed, and betrayal. And even the most determined young woman can play too many secrets too far…

1968, Chicago: For Frankie Saunders, fleeing across America is her only escape from an abusive husband. But her rescuer is her reckless, profane Aunt Daisy, still reeling from her own shattered past. Frankie doesn’t want to know what her aunt is up to so long as Daisy can get her to LA—and safety. But Frankie finds there’s no hiding from long-held secrets—or her own surprising strength.

Daisy will do whatever it takes to settle old scores and resolve the past—no matter the damage. And Frankie will come up against hard choices in the face of unexpected passion. Both must come to grips with what they need, what they’ve left behind—and all that lies ahead…

What inspired you to write it?
I visited the Hotel Somerville in Los Angeles in 2017. At the time, it was a senior living facility undergoing renovations. That visit launched my interest in 1928, the year the hotel opened. It was the first luxury hotel in Los Angeles built by African Americans for African American customers. Other luxury hotels in the city (white-owned) did not allow Blacks to be guests. For the 1968 story, I recalled that my mother had owned a 1968 Mustang, and the 1968 storyline evolved from there. It is what is called a dual storyline or time slip.

When did you fall in love with the written word?
I’ve been writing since I was a kid, making up stories is something I’ve always done, even as a toddler (according to my motherJ). So, I would rather say, I fell in love with storytelling first, then I started writing the stories I made up as soon as I learned how to read and write (around age five).

What’s the best part of being an author?
Now that I am a full-time writer, I joyfully admit that writing full-time is my dream come true.

What’s the hardest part of being an author?
The knowledge that every book is the most joyful writing experience and at the same time, the hardest thing I’ve ever done. And those are the facts for every darn book!

What books have you read lately and loved?
So, many, but I’ll give you the short list: The Love Songs of W. E. B. Du Bois by Honorée Fanonne Jeffers; Island Queen by Vanessa Riley; The Kindest Lie by Nancy Johnson; By Her Own Design: A Novel of Ann Lowe by Piper Huguley; Mademoiselle Revolution by Zoe Sivak; Yellow Wife by Sadeqa Johnson

What book(s) are you most excited to read next?
Sister Mother Warrior by Vanessa Riley; My Monticello by Jocelyn Nicole Johnson; Memphis by Tara M. Stringfellow

Who would you cast in a movie to play your main characters?
1928 Daisy Johnson—Nina Mae McKinney (1928 star of Hallelujah directed by King Vidor)

What’s next for you?
I am excited to say I have several books contracted over the next few years including the work-in-progress for William Morrow entitled The Other Princess based on the life of Sarah Forbes Bonetta, the African Egbado princess rescued as a child from West African slave traders and presented to Queen Victoria as a “gift,” chronicling the life of a Black woman coming of age in Victorian England amidst the power and pitfalls of a royal upbringing (from the PublishersMarketplace blurb on the novel, when it sold to William Morrow).

Do you have anything you would like to add?
In the Face of the Sun is my second novel. My first, Wild Women and the Blues, was also a dual storyline, but set in 1925 Chicago and 2015 Chicago. I have two novels expected in 2023: The Trial of Mrs. Rhinelander (from Kensington Books), and The Other Princess (from William Morrow). The first is a retelling of an infamous divorce trial in 1925 New York City, and the second is summarized above.

Use the Black Fiction Addiction affiliate link to purchase your copy of In the Face of the Sun by Denny S. Bryce.

Denny S. Bryce is the award-winning author of historical fiction including Wild Women and the Blues and In the Face of the Sun. A former professional dancer and public relations professional, she now is an adjunct professor in the MFA program at Drexel University, a book critic for NPR, and a freelance writer whose work has been published in USA Today, Harper’s Bazaar, and FROLIC Media. She is a member of the Historical Novel Society, Women’s Fiction Writers Association, and Tall Poppy Writers. Originally from Chicago, she now resides in Savannah, Georgia, and can be found online at DennySBryce.com.