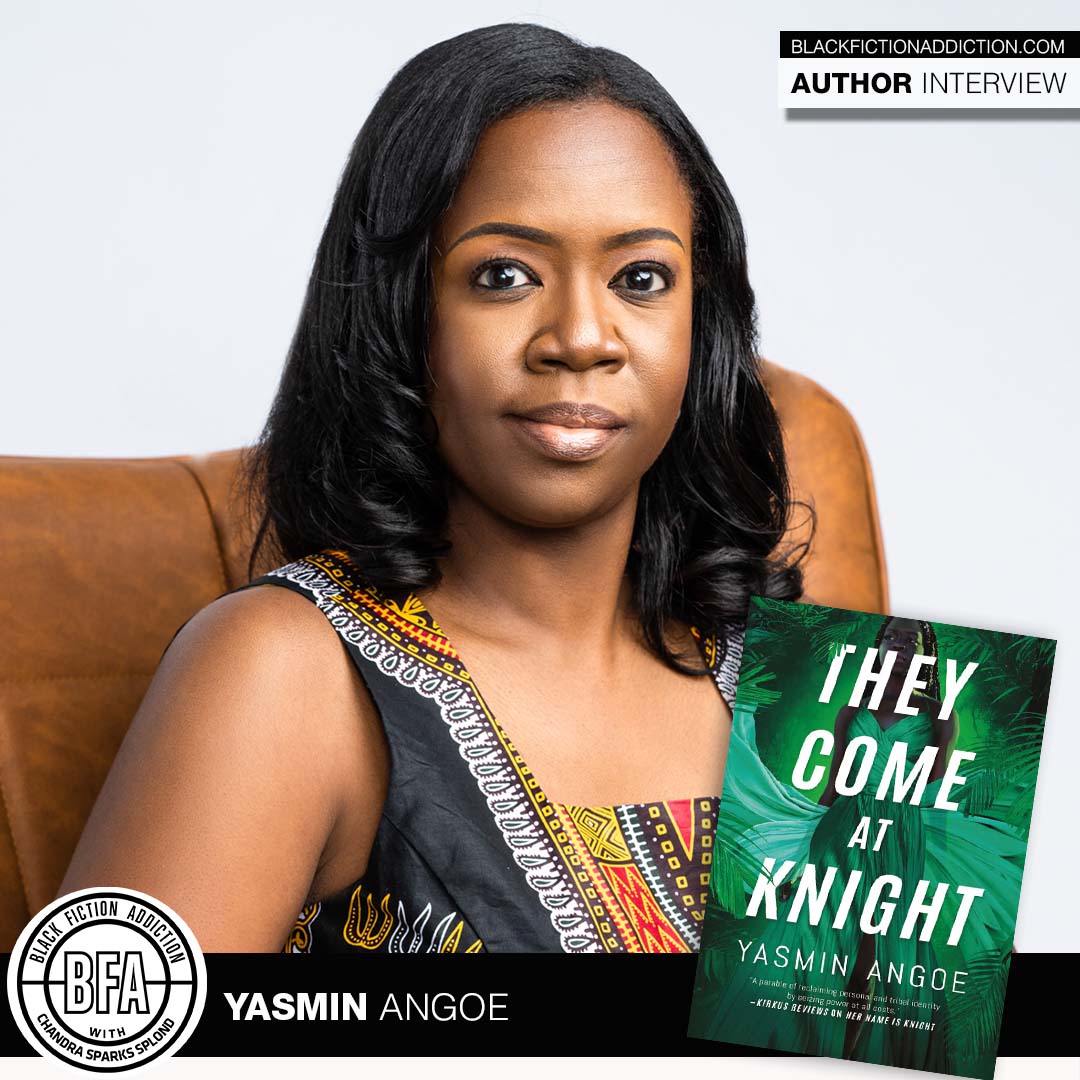 Yasmin Angoe is back with her highly anticipated sequel to Her Name Is Knight. I recently spoke with her about They Come at Knight.

They Come at Knight is the second book of the Nena Knight series. In this installment, Nena is back on a new mission after a violent siege by an unknown group throws the Tribe into chaos, and mysterious acts of violence plague the Tribe’s territories and people. As the assault on the Tribe increases, Nena suspects that the enemy is not an outside source, but rather lies within the Tribe itself and has their sights not only on the Tribe, but on the Knight family as well.

Why did you decide to write it?

This particular story was always part of the initial character arc I planned for Nena. Her first book is an origin book and about her dealing with the effects of her past. The second is her dealing with opposition that wants to undermine something good that she and the Tribe have been working to establish. The third will be a broader conflict and opposition. So in They Come at Knight, I really wanted to explore into what happens when people try to destroy something you work so hard to build, something that is good.

Who is your favorite character in the book and why?

I love all the characters, honestly, because each one has something that I (and I hope the reader) can connect with. Each character brings something to the…Council table. LOL. But I really, really love Keigle because he is a breath of fresh air that rides so hard for Nena. I love their relationships and what he does for her. And I love that he just says whatever he wants unapologetically. Even his name is inappropriate, and he loves it! He’s hilarious.

What was the hardest part about writing the story?

Oooh, the hardest part about writing the story was writing where the story ends up going. I still think about it. The hardest part about writing book 2 as a whole was writing it before book 1 was even released and I knew whether or not the readers would love Nena Knight and her crew. I am thankful and blessed that readers love Nena, and I hope that love continues on.

If you were to write a book about your life, what would be the title and why?

The Reintroduction of Yasmin Angoe. I’m horrible at titles, but I think maybe this because before I began writing Her Name Is Knight, I was really lost. I was trying to figure out who I was after losing my dad, after relocating with my two kids to a new state where we knew no one, after devastating life and marital changes….

Before all of that happened in rapid fire one right after another, I was a different Yasmin. And after all of adversity and learning, I had to find myself again and re-introduce myself not only to the world, but to me too. Like, hello world, this is me now.

What is something readers would be surprised to know about you?

I realized I like a creative in a lot of ways other than just writing. I went to school to be a culinary chef some time back but didn’t want to work in a restaurant after a bad experience. In 2020, I began teaching myself to braid my daughter’s hair because remarkably, braiding hair soothes and relaxes me! It’s mindless activity where my mind can just focus on making sure the part is just right (it’s never right for me!).

Tell me about a book that changed your life and why.

Many books changed me in different ways. There’s not one that changed my life entirely unless we’re talking about Her Name Is Knight, which is an obvious response. But Toni Morrison’s Beloved rocked me when I read it because of how [she]created the physical manifestation of someone’s grief and trauma. Octavia Butler’s Kindred for how she merged time travel and this woman learning about herself. Tananarive Due’s African Immortals Series as well as LA Banks’s Vampire Huntress series…all of those Black women writing stories so out of the norm of what was and is expected of a Black woman to write. Then there is Walter Mosely’s Fortunate Son, which I still think about because it was masterful. Kimberla Lawson Roby’s Curtis Black series had me yelling at the books. Sooo many books and authors sooo little space.

Next up is editing and revising Book 3. I will be writing a standalone thriller, so I’m thinking about what that story will be about. I have one in mind, but I am a slow thinker, faster writer, so I need to ruminate on that a bit. And then I have another project that is currently unannounced that I’ll be working on. I also have writing and reading conferences that I’ve been asked to speak at, so that’s going to be fun. But I’m ready to book more work, so load me up!

I just want to say how very thankful I am for this opportunity. Being a published author has been my dream since I was little. Knowing my stories are being enjoyed by readers, reading their email messages when they write to tell me how the book made them feel, means the world. So, thank you.

Use the Black Fiction Addiction affiliate link to purchase your copy of They Come at Knight.

To learn more about Yasmin Angoe, visit her website or connect with her on social media.

Previous Post: « Author Toni Shiloh Is In It to ‘Win’ It
Next Post: David Dada Releases Debut Novella ‘Many Happy Returns’ »