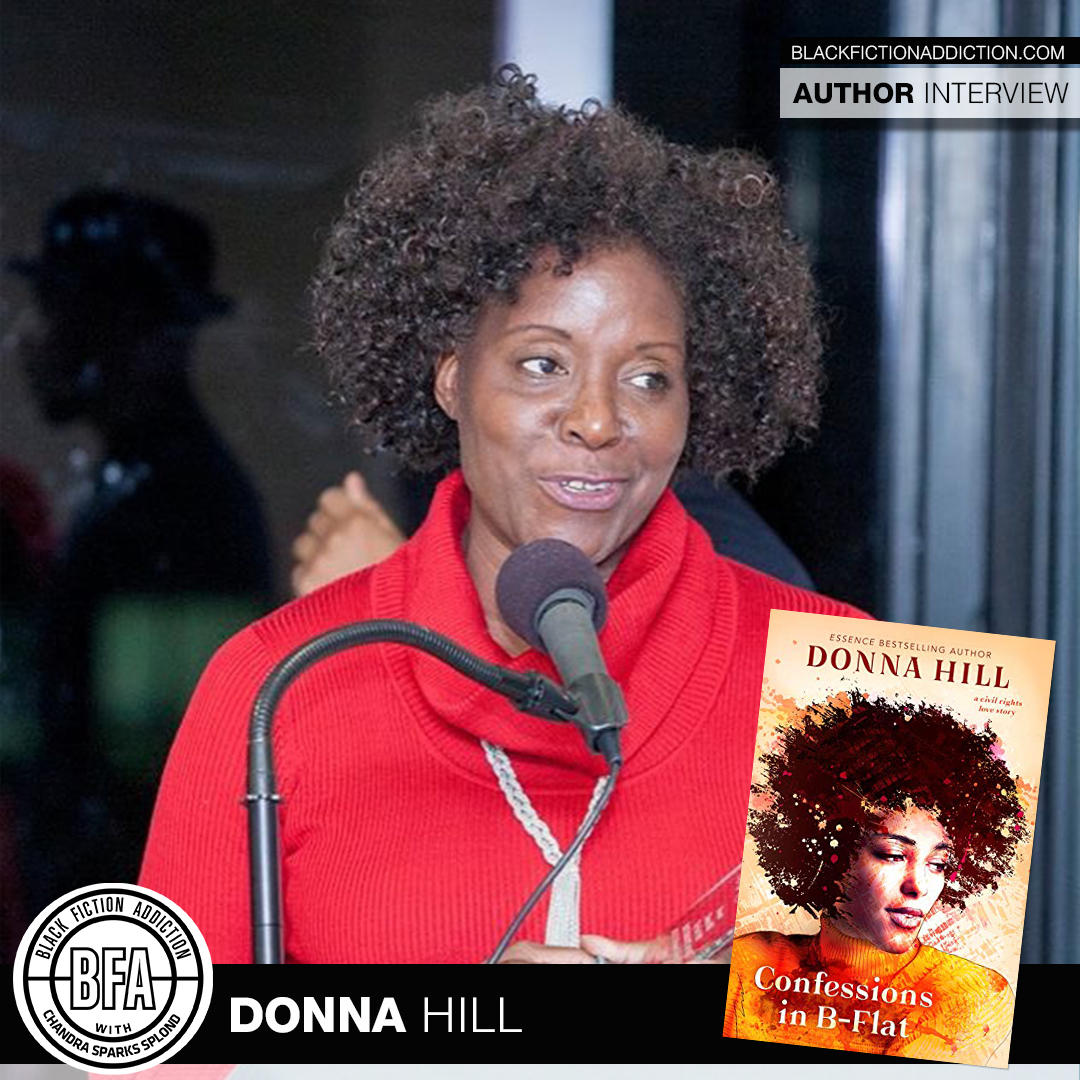 Donna Hill is back, giving readers a taste of history in her latest release, Confessions in B-Flat.

Tell me about your latest book.
My latest book is CONFESSIONS IN B-FLAT and will be released on November 24.  It is a twist on Shakespeare’s Romeo and Juliet–warring factions.  In my version the two sides are not family but ideology.  The story is set at the height of the Civil Rights Movement 1963–68. My main characters are Anita Hopkins, a spoken work artist, activist and follower of Malcolm X. Jason Tanner from Atlanta is a follower of Dr. King who is sent to New York City (Harlem) to open a local office. The day that Anita and Jason meet for the first time is on the bus to New York, the same day as the church bombing in Birmingham. They run into each other again on the streets of Harlem, and their lifestyles, belief systems and backgrounds all clash even as much as they are attracted to each other. The novel celebrates the fight for their love, while also showcasing that we are more alike than different. Throughout the story, iconic moments in history are on display from news clippings, photographs, video and speeches, all set to the backdrop of Motown music and Jason and Anita’s reckoning of what love and happiness truly mean.

Why did you decide to write it?
It was a book that was in the making (an idea) for more than a decade. It began with only a title. I originally imagined a story where the center was apartment “B” and folks from Harlem dropped in to talk about the state of black folk. I knew I wanted to use the trope of Romeo and Juliet (star-crossed lovers) but not in the traditional sense. I wrote one version a few years ago, but it didn’t land on an editor’s desk. I made a series of changes from time to time. Finally, a bit more than a year ago, I sent it to Entangled Books and they loved the latest iteration. This book was truly a labor of love and I am so excited to see reader response.

What do you want readers to learn from the story?
I think I want them to learn that differences are what make us unique and that when you allow yourself to look beneath the surface we are the same. Also, I really want readers to go on the journey of discovery with my characters and to reaffirm their own commitment to “believe” and have “hope.”

If you could pick another profession, what would it be and why?
Ha. I’ve really only wanted to be a couple of things in my life, career-wise. When I was a teen I wanted  be a magazine publisher! I didn’t grow up during a time when being a writer, especially a black writer, was something to aspire to. I loved writing for as long as I can remember. Ultimately, I knew I wanted to teach (which I’m doing). I think I ‘m lucky in that I’ve landed where I wanted to land.

What’s the worst part of being an author?
Deadlines!

What’s next for you?
I just finished a book for Harlequin, the third book of the Grants of D.C. and I’m working on another book for Entangled which is another period book–sort of.  it’s generational as it revolves around the descendants of freed slaves that set up their community in Sag Harbor, NY., all of which is uncovered by my modern-day heroine.

Do you have anything you would like to add?
Thank you so much for this, Chandra. Your support of authors is so important as well as your own contributions to the literary marketplace.

Use Black Fiction Addiction’s affiliate link to purchase your copy of Confessions in B Flat.

You can have enough books.