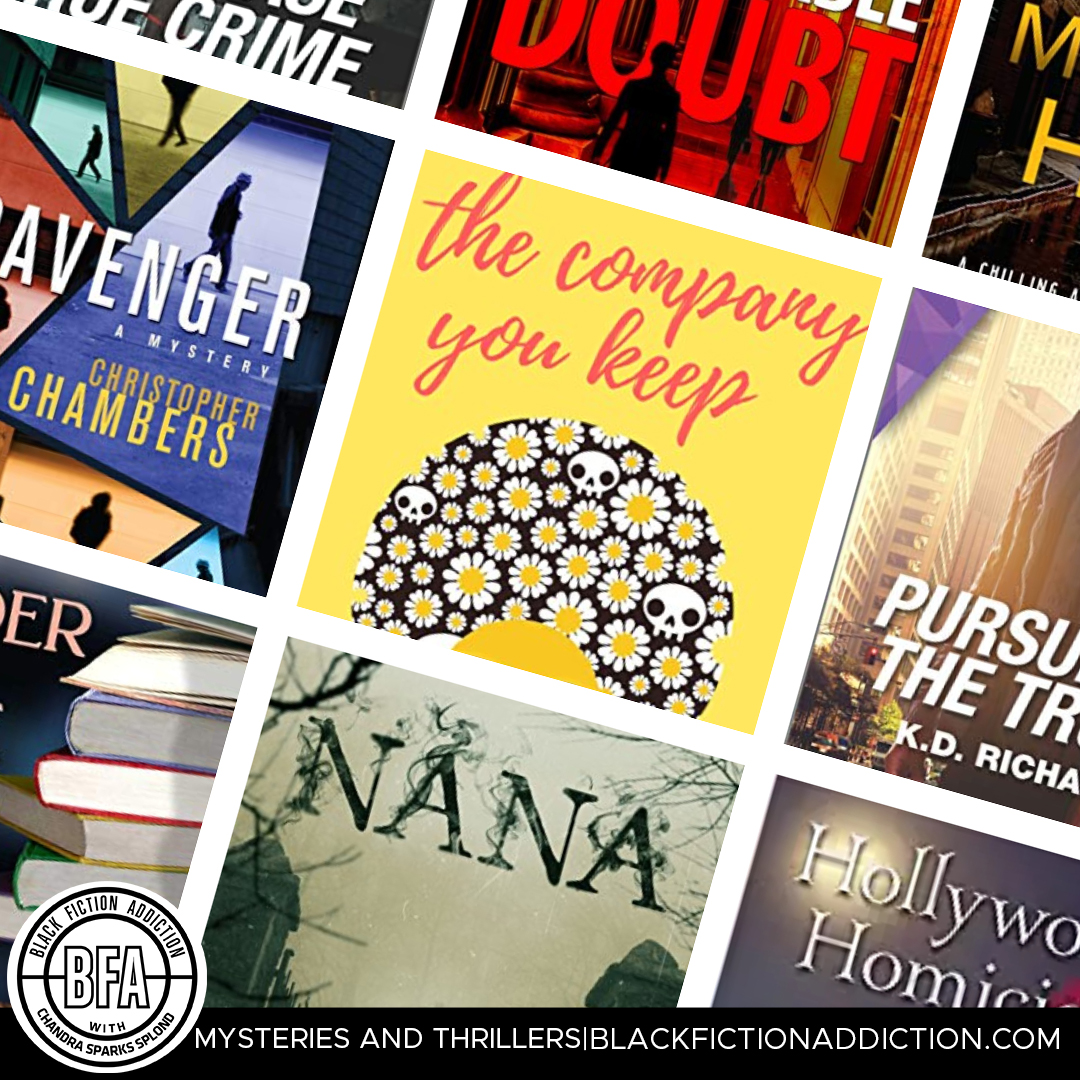 Halloween is right around the corner. If you’re looking for thrills or chills, check out these books.

Avery Keene, a brilliant young law clerk for the legendary Justice Howard Wynn, is doing her best to hold her life together—excelling in an arduous job with the court while also dealing with a troubled family. When the shocking news breaks that Justice Wynn—the cantankerous swing vote on many current high-profile cases—has slipped into a coma, Avery’s life turns upside down. She is immediately notified that Justice Wynn has left instructions for her to serve as his legal guardian and power of attorney. Plunged into an explosive role she never anticipated, Avery finds that Justice Wynn had been secretly researching one of the most controversial cases before the court—a proposed merger between an American biotech company and an Indian genetics firm, which promises to unleash breathtaking results in the medical field. She also discovers that Wynn suspected a dangerously related conspiracy that infiltrates the highest power corridors of Washington.

As political wrangling ensues in Washington to potentially replace the ailing judge whose life and survival Avery controls, she begins to unravel a carefully constructed, chesslike sequence of clues left behind by Wynn. She comes to see that Wynn had a much more personal stake in the controversial case and realizes his complex puzzle will lead her directly into harm’s way in order to find the truth. While Justice Sleeps is a cunningly crafted, sophisticated novel, layered with myriad twists and a vibrant cast of characters. Drawing on her astute inside knowledge of the court and political landscape, Stacey Abrams shows herself to be not only a force for good in politics and voter fairness but also a major new talent in suspense fiction.

n the lively, but desperate world of D.C.’s underbelly, a Black homeless man must quickly learn the ropes of being a detective after a wealthy ex-government official sets him up to take the fall for a brutal crime he didn’t commit. Christopher Chambers, author of A Prayer for Deliverance and Sympathy for the Devil (NAACP Image Award nominee) brings a 21st-century take on hardboiled noir tales in SCAVENGER, a gripping thriller underscored by themes of race, homelessness, hustling, and the savagery—and salvation—of the human psyche. The novel centers on Dickie Cornish, a Black streetwise survivor living in a homeless camp near D.C.’s Smithsonian Museum of Natural History. Framed for the murder of two of his closest friends and facing life in prison, Dickie crosses paths with wealthy ex-Homeland Security Secretary, Jamie Bracht. Bracht offers him a chance at a new life if Dickie can navigate an underground world to uncover a prize Bracht will stop at nothing to acquire.

As Dickie searches, SCAVENGER tracks its way through an underground population of Washington, D.C., where hustlers, drug addicts, homeless, and undocumented immigrants jostle for crumbs while trying to survive. Chambers paints a portrait of D.C. from the ground up, with back-alley streetscapes, gentrification clashes, and unexpected encounters between politicians and bottom-rung natives—all set against a soundscape of patois, street Spanish, and D.C. slang. A hopeless amateur detective at first, Dickie quickly learns the ropes of being a sleuth in a cat-and-mouse game of greed, deceit, double-crossing, and murder. As Washington City Paper notes: “Like Hammett with San Francisco or Chandler with Los Angeles, Chambers’ mystery is as much about Washington as it is about the amoral monsters who prey on ordinary people and the lone gumshoe who takes them on.”

A Deadly Inside Scoop

Recent MBA grad Bronwyn Crewse has just taken over her family’s ice cream shop in Chagrin Falls, Ohio, and she’s going back to basics. Win is renovating Crewse Creamery to restore its former glory, and filling the menu with delicious, homemade ice cream flavors—many from her grandmother’s original recipes. But unexpected construction delays mean she misses the summer season, and the shop has a literal cold opening: the day she opens her doors an early first snow descends on the village and keeps the customers away.

To make matters worse, that evening, Win finds a body in the snow, and it turns out the dead man was a grifter with an old feud with the Crewse family. Soon, Win’s father is implicated in his death. It’s not easy to juggle a new-to-her business while solving a crime, but Win is determined to do it. With the help of her quirky best friends and her tight-knit family, she’ll catch the ice cold killer before she has a meltdown…

Dayna Anderson doesn’t set out to solve a murder. All the semi-famous, mega-broke actress wants is to help her parents keep their house. So after witnessing a deadly hit-and-run, she pursues the 15-grand reward. But Dayna soon finds herself doing a full-on investigation, wanting more than just money – she wants justice for the victim. She chases down leads at paparazzi hot spots, celeb homes, and movie premieres, loving every second of it – until someone tries to kill her. And there are no second takes in real life.

The Company You Keep

Hard as she tried, twenty-eight-year-old Kendra Clayton never quite broke out of her hometown of Willow, Ohio. Now she works part-time as a GED instructor and beefs up her income by hostessing at her uncle’s restaurant, soaking up the local gossip. It’s a quiet life, but Kendra hasn’t given up hope that one day Mr. Right will walk through the door. In the meantime, her sleepy hollow is about to get a rude awakening, and Kendra is about to get some excitement—though it’s not quite what she had in mind.

When her friend Bernie’s boyfriend, a notorious womanizer, is brutally murdered, both she and Kendra are implicated in the crime. The only way Kendra can save herself—and the friend she believes is innocent—is by doing some investigating of her own. And the closer she looks, the more suspects she finds.

Jordan was a man that women loved and hated—usually at the same time. Now one of them has crossed that thin line. But between Jordan’s past and present conquests—and a chain of emptied wallets and vengeful hearts—which one could be a killer? As Kendra’s curiosity draws her deeper into the case, she also gets into an unexpected attraction to a man who may hold the missing piece of the puzzle—if she can survive long enough to put it together.

Monica Stephens never knew her birth mother. Raised by a strict but loving adoptive parent, she blossomed into a woman with a thriving career as a pediatrician and a family of her own. But sometimes, she wondered about her origins. Especially her biological mother.

Confessing to be the birth mother Monica had long wanted to meet, Grace quickly becomes an indispensable member of the Stephens household. Cooking their meals. Looking after the children. Comforting Monica when the family dog is inexplicably killed. Tending to Monica as she falls ill to a mysterious sickness that, every day, makes Monica look and feel older.

Monica’s husband, Troy, knows something is up. He launches an investigation into the woman who demands to be called “Nana,” and has taken over his home.

But the truth is beyond their wildest imaginings.

It seems Grace has done this before…

Murder by Page One

Marvey, a librarian, has moved from Brooklyn to a quirky small town in Georgia. When she’s not at the library organizing events for readers, she’s handcrafting book-themed jewelry and looking after her cranky cat. At times, her new life in the South still feels strange…and that’s before the discovery of the dead body in the bookstore.

After one of her friends becomes a suspect, Marvey sets out to solve the murder mystery. She even convinces Spence, the wealthy and charming newspaper owner, to help. With his ties to the community, her talents for research, and her fellow librarians’ knowledge, Marvey pursues the truth. But as she gets closer to it, could she be facing a deadly plot twist?

Seduced by the Badge

Chicago detective Armstrong Black follows the rules—his rules. It’s how he solves the crime. When he’s assigned to partner with an Atlanta detective who’s hell-bent on bringing down criminals who targeted her sister, he’s determined to stay in control. But he may have met his match this time. Stunning Danni Winstead is all blazing temper and sweet temptation. Working with her tests Armstrong’s restraint; trusting her could put them both in fatal jeopardy…

Eugeena Patterson usually doesn’t have a problem putting her nose where it doesn’t belong. After her last mystery busting incident, she’s determined to hang up her amateur sleuth hat. Or at least that’s what she’s telling Amos and her family.

When her long-time friend, Rosemary Gladstone, encourages her to attend their high school reunion, Eugeena decides it wouldn’t hurt. All is well, until Eugeena and Rosemary face off with their number one enemy from high school. What should have been a celebration, hits a sour note when their nemesis is found dead, not too long after a very public disagreement.

There is no rest for the weary as Eugeena dives into another mystery. She doesn’t have a choice since she has to clear her and Rosemary from being considered murder suspects.

Pursuit of the Truth

His skills can keep her safe

Her secrets could get them killed…

Security expert Ryan West’s worst fears come to life when hotel CEO Nadia Shelton is pushed in front of a taxi and nearly killed. Someone will do whatever it takes to find the brother Nadia thought was dead, and the only way Ryan can protect her as they uncover the truth is to stay strictly professional. But the sparks igniting between them are nearly impossible to ignore.

From a simple robbery gone horribly wrong to a grisly murder in a secret love dungeon, this stellar collection of crime fiction short stories showcases some of today’s finest voices of color.

Edited by Wall Street Journal bestselling author Abby L. Vandiver, this thrilling anthology will keep you on the edge of your seat.

Jennifer Chow: “Midnight Escapade”
After years of silence, two women decide to meet up in a unique escape room but get trapped in a deadly game from which there may be no escape.

Tracy Clark: “Lucky Thirteen”
A gun. A last meal. And only one survivor. Sometimes the stars align–but only for the lucky one–as predator and prey come face-to-face one fateful New Year’s Eve.

H. C. Chan: “Murderer’s Feast”
Techpreneur John Manley left a trail of duped investors and damaged women in his wake. What happens when two hundred of his closest enemies gather for a five-day gourmet retreat?

Christopher Chambers: “In the Matter of Mabel and Bobby Jefferson”
It’s almost midnight, it’s snowing, and a bored call center worker catches a customer inquiry that smells of murder. Is he a knight rescuing the intended victim or someone else’s pawn?

True crime is her beat.

But this cold case is personal…

Samantha Vincent has turned her fascination with true crime into a popular blog. When an old friend asks her to investigate a murder the police couldn’t solve, she begins to suspect that the cops want this case to go cold. Sam is confident she’ll catch the killer when Detective Gregory Harris agrees to help her, but everything changes when she becomes a target…

When attorneys Vernetta Henderson and Neddy McClain are tapped to take on the biggest case of their careers, they are less than thrilled about working together. Their strained relationship, however, is the least of their problems. Their socialite client—charged with the brutal murder of her husband—is demanding an immediate dismissal of the case. But a ruthless prosecutor is determined to make sure that doesn’t happen. Forced to fight a common enemy, the two women close ranks and, in the process, develop a bond that sees them through the uncertainties of trial, the pain of betrayal and pressures neither could have imagined.