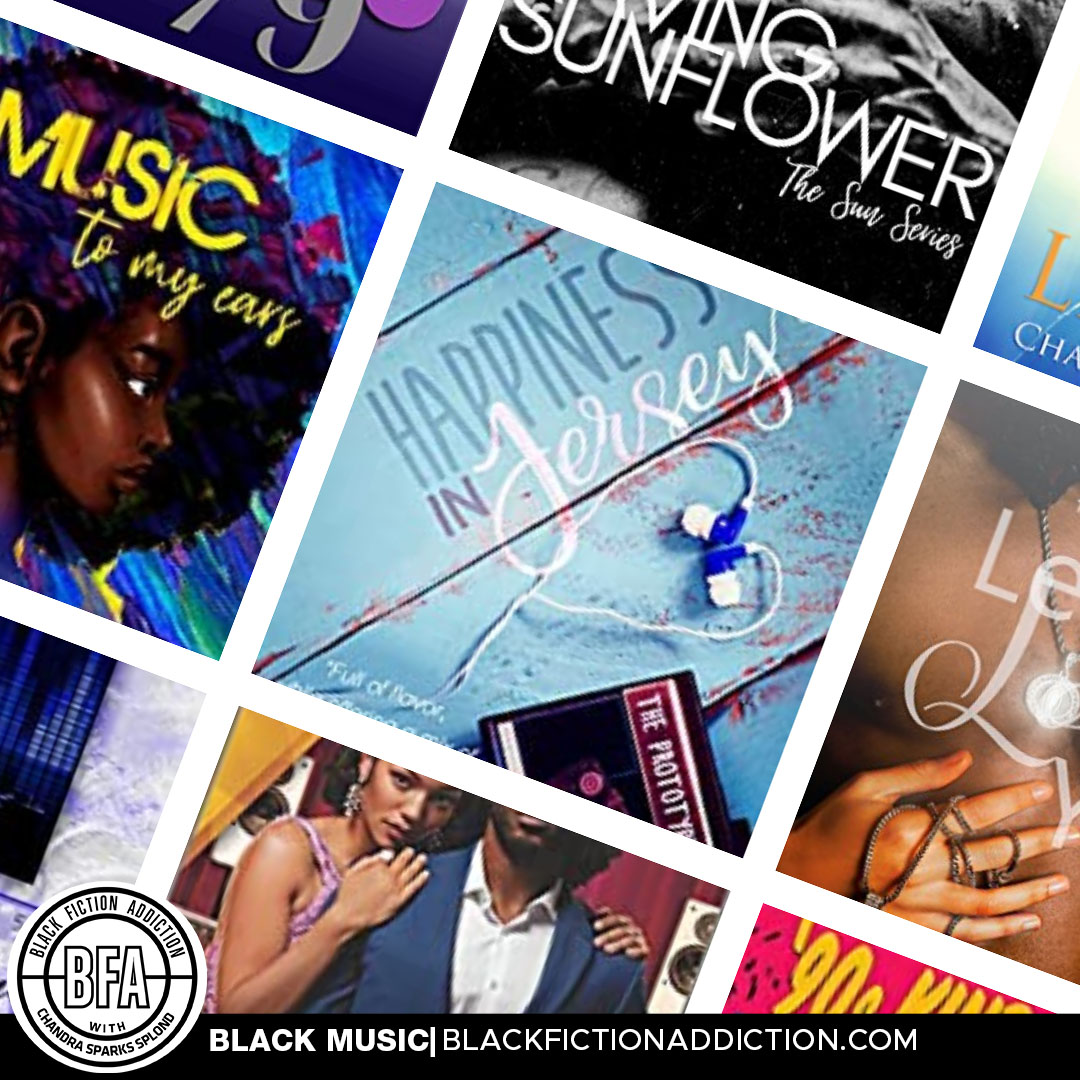 June is Black Music Month, and Black Fiction Addiction is celebrating by spotlighting some books where music plays a part.

From Book 1: Their red-hot reunion

is off the charts! They made passionate music together.

Has this heartbreaker changed his tune? Songwriter Eden Voss had the perfect man—sexy, charming, talented and hers. Until record executive Blaine Woodson broke her heart to save his fledging label. Now music’s bad boy is back, begging for her songwriting skills in his studio…and her lovemaking skills after hours. Eden vows to keep things strictly business this time. But there is nothing professional about the heat still between them…

From Book 1: Some believe the old adage, “where there’s smoke, there’s fire.” Well, in some instances the smoke is just a coverture for secrets. Dark ones.

Ragee is a successful R&B singer, music composer, and actor who shot to fame and celebrity at rocketing speed. He has the voice, the troubled soul, the seductive look, and the alluring mystique, all of which give him the traditional packaging of a soulful rhythm and blues singer. But he also has an unshakable stigma attached to his stardom that won’t seem to go away.

Wynter Blue thought she was taking control of her world the day she up and quit her job. As a social service professional, she was done with helping afflicted adult men to right their paths in life. She was ready to live for her. Finally. She wanted to pursue her dreams and stretch the bounds of her creativity.

Little did she know, the day she walked out of her job was the very one she’d run into the shroud of smoke. His smoke. Awfully familiar with secrets herself, Wynter questions if she can handle Ragee’s darkness while trying to bring him into the light of truth.

DISCLAIMER: The Rhythm of Blues is book one of a two-book series. This series is for mature audiences ONLY. This installment is a full-length novel containing profanity, erotica, and sensitive sexual content. It ends on a cliffhanger. If you do not like dark, racy romance between your pages this literary venture is not for you.

Since the death of his twin brother, Oliver’s caught between pleasing his fans and finding himself. Emery finds him first.

Emery has never felt more alone. Raising her daughter is both her pleasure and her pain as she struggles to hold on to her job as a bartender and keep a roof over their heads. With no one to help them—no support system—any unexpected expense or late bill could turn their whole world upside down.

Reeling from the death of his twin brother and bandmate, rock star Oliver Smith is trying to drink his problems away. Apparently he isn’t very good at it; they follow him wherever he goes. Also in hot pursuit are the paparazzi, who catch Oliver at his lowest low.

He could have walked into any bar in California, but he walked into hers. Emery helps Oliver lose the crowd, and they find themselves alone: two people whose paths are marked with loss and pain. However, they hold an unshakable hope for healing. They find solace together, but can their love withstand the world?

From Book 1: SHE MADE HIM FACE THE MUSIC

Orrin Greenwood, ex-boy-bander and notorious womanizer, is ready to make his big comeback. Needing a hit record sooner than later, his manager suggests up-and-coming singer/songwriter Jauri Tutuola. He jumps at the chance thinking she will be an easy ride to the top of the charts, but what he doesn’t anticipate is her taking him on the most thrilling tour of his life as she makes him confront his past and make room for her on his stage and in his future.

Surrounded by a music industry full of clones, Jauri “JT” Tutuola wants to break new ground and do things her way. She vows to no longer let anything keep her from the spotlight, especially not her deeply melanated skin, her bushy hair or her “creative genius” label head. She initially dismisses Orrin as just another distraction until he begins to show her that making music and making love don’t have to be mutually exclusive.

The Soundtrack Series follows Jauri and Orrin, two star-crossed lovers determined not to let anything thwart their attempts at staying on beat even though their jam session has many interruptions over a span of fifteen years.

To avoid being let down Toni Riley doesn’t ever make birthday plans, but a once in a lifetime private lesson with famed artist Arlan Parks just might be worth breaking the rules for.

Let Me Love You

***This novel contains profanity and sexual content. If you do not like those elements in your romantic reads, this is not the book for you***

From Book 1: The only thing in Jersey Kincaid’s world that she has time for are keeping her grades up so that she doesn’t lose her scholarship to South Texas University, playing the bass in her band, The Prototype, and satisfying her coffee addiction. Oh, and the occasional random hook-up she indulges in to pass the time.

Jersey’s seen enough in life (courtesy of her Pops) to realize that undying romance is nothing more than a myth used to sell books and movie tickets. As she knows too well, the only thing inevitable in life is death— love is definitely not promised.

That’s why when Jersey meets Isaiah “Zay” Broussard with his soulful gray eyes, quick wit and easy charm, she’s determined to remain aloof. She doesn’t have time to get sidetracked by fleeting fantasies, even if she does feel an unexplainable connection to Zay she’s never experienced before.

But when his interest in her only seems to intensify, despite her attempts to brush him off, she gets to see a side of him and herself she didn’t expect…

Dominic DeBlanc is a wayward street hustler and part-time rapper constantly running from a past that haunts him. With a bleak outlook on life, he finds himself teetering between two worlds—a seedy one where he’s not guaranteed to see his twenty-second birthday and a promising one that might bring him recognition for his talent. After a chance encounter with a peculiar waitress, he finds himself engulfed in a friendship he never knew he needed. However, his complex life and reckless decisions challenge their already complicated bond.

It’s 1997, and R&B star Castra is gearing up for the release of her third album in a crowded landscape of other young, beautiful, and talented singers. In a panic, her label reaches out to Romell “Danger” Brooks, super producer, to work his magic like he did on her first album seven years before. Castra’s singing career, and contract, depend on it.

It seems like an impossible feat, because the two share a complicated history. The musical chemistry they created all those years ago was the catalyst for an explosive relationship full of young love, intense passion, and eventually, heartache.

The moment the first song begins to play, the scabs on their old wounds begin to tear away, and over the course of those three days, they’re forced to confront those old feelings. With their careers, and hearts, at stake, can they recapture the magic?

Sixteen-year-old Jasmine Richardson has a love for music. When she gets on the turntables, her gift for spinning and rhyming earn her admiration and respect. She’s also talented academically, but her parents disapprove of their daughter’s hobby, hoping it’s a phase she’s going through. Still, Jasmine finds it hard to deny the joy and freedom she feels when she’s playing music that makes people smile and dance. After a local contest, Jasmine attracts the interest of some music-industry honchos. Then the attitudes of the people around her seem to change and she’s forced to face some tough situations. Suddenly it becomes harder for her to tell who’s really happy for her and who’s totally a fake. But when the music is in your heart, and your talent shines bright, sometimes all you can do is…spin it like that.

A contemporary women’s novel, SINGSATION is the inspiring story of a gospel singer’s rise to prominence and her spiritual awakening.

Deborah Anne Peterson knows that her amazing singing voice is a gift from God and fully realizes that when He gives you a gift He means for you to use it. And she fully intends to take that gift to new heights, even though she has never been outside of Georgia. Then, one miraculous Sunday, Triage Blue, hometown rapper and movie star, becomes mesmerized by her beautiful solo in his grandmother’s church choir. He introduces Deborah Anne to the “right” people, and suddenly she is on tour singing backup for one of the country’s top R & B artists. She believes her prayers have finally been answered. But that success exacts a steep price, and with every one of her beliefs challenged, she will come to realize the true purpose of her gift.