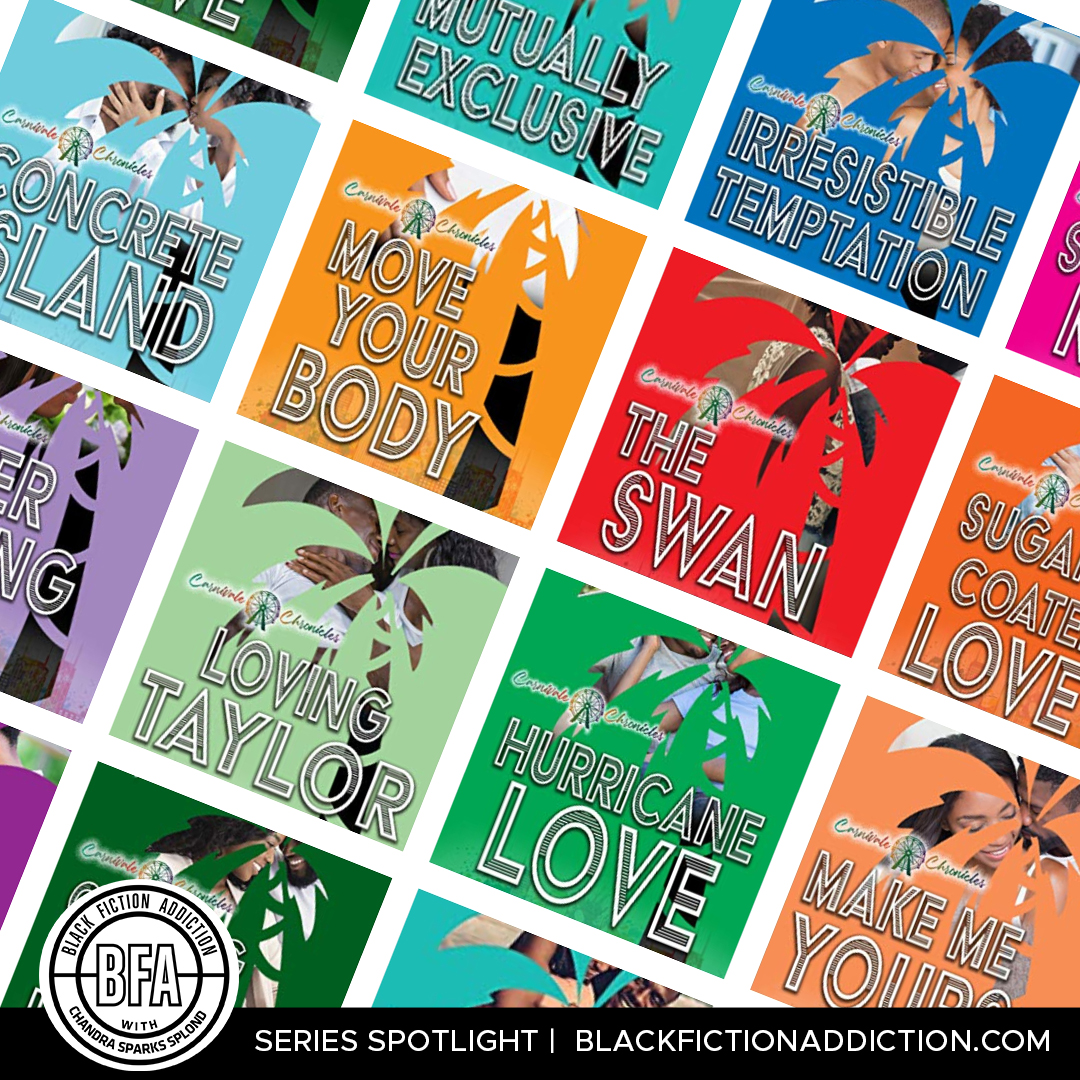 I’m always in search of new series, so when I came across Carnivale Chronicles, I knew it was something I had to share. The 13-book series features books by some authors I love and few new-to-me authors too.

Nancy Redmond’s professional life is on point. It’s her personal life that could use a major overhaul. Selling her business and relocating from the midwest to the east coast, Nancy is determined to get a fresh start and prove to herself that she doesn’t need a man to fulfill her.

Gabriel “Gabe” Saxton’s world is turned upside down when he catches the woman he’s to marry in a compromising position. Devastated, he’s convinced karma has finally caught up to him for breaking an old lover’s heart.

After ten years Nancy and Gabe are unexpectedly reunited and the attraction between them is just as magnetizing. As the couple overcomes previous hurts and betrayals and is on the path to forever, Gabe’s former life collides with the one he’s building with Nancy. Blindsided, Nancy retreats and releases Gabe from his commitment to their relationship. But will she regret her decision?

Feisty tomboy, Sasha Allen, is blunt, bold, and knowledgeable about everything outdoors. Given her job with Kathan’s Sporting Goods—and her new comfort equipment line, CS Lave and Luxury—Sasha is building a reputable career around everything she loves. However, when walking complication, Trent Hansworth, becomes entangled in more than her business, she must determine whether work and play are as mutually exclusive as she always thought.

For sexy ladies’ man, Trent Hansworth, actions always speak louder than words. Therefore, it’s no surprise that the honest and lively, Sasha Allen, caught his eye from the moment he began working at the children’s camp. Like we learned in kindergarten, boys tease the girls they like the most. His reaction to her presence might read as childish and casual at times, however, his thoughts are anything but.

As long as Sasha can handle a joke or two, they have nothing to worry about. Yet, when things go from fun and games, to intensely passionate filled with stolen kisses, suddenly, things aren’t so funny anymore.

Emerie Cole is at a crossroads. After a humiliating break-up with her trifling boyfriend, Emerie is forced to find a new home. In the interim, she decides to go to her brother’s place to figure out her next step. Only she’s not alone. One minute, she is trying to forget about the years she’d wasted with one man. The next, she’s kissing the man who starred in too many teenage dreams to count—her brother’s best friend.

Celebrity DJ Vaughn Carr made beating the odds a full-time job. From an early age, he learned to open closed doors and step in like he owned the room. Yet, there’s one door that should remain closed, one person that should be off-limits—his best friend’s sister, Emerie. Circumstances force them in close proximity and, soon, he can’t get her out of his head… or bed. The more time they spend together, the more he realizes that he needs her in his life.

The only problem? Convincing her that this off-limits, forbidden relationship can be more than hidden affection and secret liaisons. This can be forever.

When Trista St. Paul gets the opportunity to leave her home in St. Lucia to work on one of the largest Afro-Caribbean Carnivale’s to hit the streets of Chicago, she jumps at the chance to bring some island flavor to the city. Even better, she gets to work with one of her closest friends too. Maceo is everything she’s never wanted in a man, which makes him the best guy-friend a girl could ask for!

Single dad, Maceo Alexander-Baptiste, has been waiting for the chance to take a much-needed vacation and Chicago sounds like the perfect place. He’s spent years growing his graphic design business and creating promo for this event is easy work. Working alongside long-time friend, Trista, is icing on the already sweet cake.

Years ago, Trista threw Maceo into the friend zone faster than he could blink. So, Maceo may be in the windy city to work, but he’s also determined to make her see that they may be great friends, but they’re way better lovers.

Professor Starr Night is a woman with a cause. Her goal is to make sure there’s a crowd at the Afro-Caribbean Carnivale she’s helped bring to Chicago. Meeting an ambitious community activist may be just what she needs to spread the word. Except, their first meeting doesn’t exactly go as planned.

Christopher Combs has always strived to educate his community. For him, that also means getting as many people on board as he can to help him fight the greatest black exodus Chicago has ever experienced. To reach his goal, he feels he needs a bigger platform. Insert beautiful Starr—the woman in his spotlight.

With Starr and Christopher determined to make a difference in their own way, how will they handle one another when their love for their city and people manifest itself in different ways?

Kickstart Dance Studio owner Tatiana Anderson is excited about her squad’s upcoming competition at the Afro Caribbean Carnivale. Practicing day and night has her team in tip-top shape, and she’s confident they will take home the win. That is, until she discovers the rival dance studio across the street is who they’ll be facing off against.

And not only will they compete for the victory, but getting to know the leader, Messiah West, has Tatiana wondering if they’re battling for something a little more. Determined to ward off any sentiments of desire, Tatiana’s guard remains elevated. But Messiah’s perseverance is just as strong in his ambition to break down her walls.

Nova Bradford and Mikhail Luther have a long history. They’ve known each other since they were students at Blythe T. Young Magnet High School. Mikhail was the handsome high school jock with the pretty homecoming queen on his arm and Nova, well Nova was the ugly duckling no one cared about. After years of working on her self-confidence thanks to a friend and therapy, she finally decides albeit reluctantly, to embark on a school reunion cruise to tropical paradise where she will come face to face with her former classmates that taunted her every day. What she doesn’t expect to find is Mikhail, alone and not the same young man from school. What follows seems unlikely, but it’s also the thing they both need …

To help a good friend out of a bind, advertising manager Finley Cooper volunteers to accompany pastry chef Cassius “Cash” Warren to Chicago for the Chi-Flavor Afro-Caribbean Carnivale. They’re prepared for everything, except the sweet mischief in store for them.A road trip. An overwhelming attraction. Several days in close quarters… What’s the worst that could happen?

When journalist Asia Montgomery took her wedding vows, she meant them. Yet, somewhere along the way, things changed. With her marriage crumbling all around her and her trust shattered, she fears it may be too late to save it. She takes refuge at a tropical resort to figure out her next steps, but doesn’t count on Jamal following her there…or his persistence.

Jamal Montgomery knew his wife, Asia, was the only woman he’d ever want. He has no intention of giving up on them, but gets the surprise of his life when he comes home early from a business trip and finds her gone. The tenacious attorney is determined to win her back and goes after her. Now everything they’ve built is hanging in the balance. Jamal and Asia will have to fight to rediscover the love they once shared and the passionate dreams yet to be fulfilled.

After seeking the therapy he needed, Lieutenant Taylor is learning how to cope with his childhood trauma. It is allowing him to express his love for Octavia, and Chrystal. It is also allowing him to be loved by both of them, in their own way. They say that love conquers all, but does it really? Even though he is on the mend, there are still a few phobias he has not overcome. One being loud noises! Octavia and Chrystal knows this! So, why would they ask him to join them at Carnivale? Will he muster up the courage to put aside his phobia and join them? Will their love for him be all the courage he needs? Or is it just too much to ask?

What is more important, love or career? That is a dilemma that has plagued Rowan Browne for most of his life. Gwen Goodwin was the love of his life until a combination of ambition and fear drove them apart. In the middle of filming his first independent film, Rowan receives a phone call that shatters his world. He is forced to put his production on hold to travel from New York City down to Jamaica for his mother’s funeral. Unbeknownst to him, Gwen is on the island on vacation. The ex-lovers cross paths and try to rekindle the romance that had once burned white hot. While they try to figure out if they truly do belong together, they get caught in a fight for survival against Mother Nature when a category five hurricane slams into the island. Will this ordeal bring them closer and will they both survive the devastation?

Make Me Yours
Angela Seals

Jaide aka JoJo Jackson is a five time, Grammy Award winning pop singer. She’s let fame and fortune deter her from love because men tended to fall at her feet in admiration. Which usually meant, their love – better yet – their lust, was nothing but the fake kind. In all honesty, she adores the attention and she’s never had to work for anything in her life. Little does she know, Aden Campbell has been waiting to bring the big time singer down a notch.

Stage Manager Aden is all about hard work. The harder, the better! And this perfectionist has watched JoJo for years and knows that this diva pop star wouldn’t know hard work if bit her in her beautiful backside. When he learns she’ll be taking his stage on one of the biggest events to hit Chicago, he can’t help but smile. The city is his playground and with him, everyone is on equal footing. No matter what he’s heard, he’s ready for her feisty attitude.. Or so he thinks…

He’s not into commitment. She’s looking for forever. But neither of them can deny the sizzling attraction between them.

Layla St. John has the talent, creativity, and drive to start her own clothing line. What the big-hearted entrepreneur lacks is the capital. So when a celebrity photographer offers to connect her with investors if she’ll let him feature her in his photography series about Caribbean carnival culture, it’s a deal she can’t refuse. But Layla can’t help being attracted to the brilliant artist. Too bad he’s her little brother’s former best friend and way too young for her.

Quincy Johnston has spent the past ten years making a name for himself as a photographer and avoiding complicated relationships. But when an impromptu trip to his small hometown, Pleasure Cove, leads to a chance encounter with the woman he’s been crushing on since he was a kid, Quincy gets a taste of the deep connections he’s been missing.

Can Layla and Quincy move past their relationship fears and take a chance on turning their short-term, secret fling into a shot at forever?

Previous Post: « Author Farrah Rochon Takes On a New ‘Project’
Next Post: Male Authors to Check Out This Father’s Day »